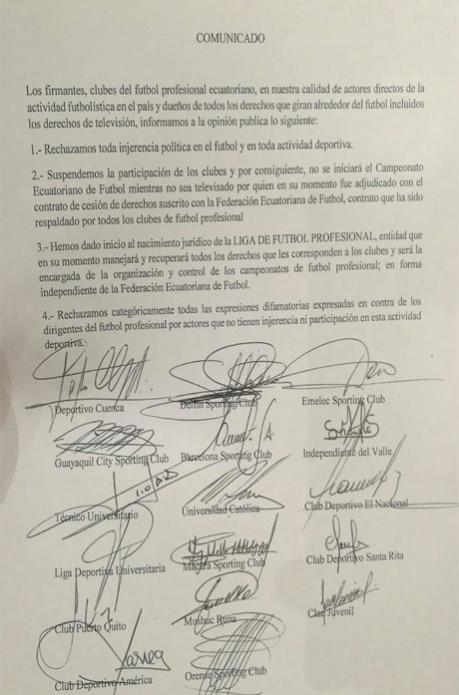 The Ecuadorian Soccer Championship will not start until Ecuafútbol ratifies the contract signed with GolTV, in June 2017. This was decided by the presidents of the first category clubs, who met at a hotel in downtown Guayaquil.

The representatives of the first category clubs reached that agreement after the meeting that took place on the afternoon of today, February 1st. This was attended by representatives of 17 of the 24 first-class clubs, who voted on the ratification of the contract they signed with GolTV, for the next 10 years, at a cost of USD 270 million.

The championship was to begin on February 9, as established on January 30, in the Executive Committee of the FEF. The managers drafted a document, which would later be delivered to the FEF. The organism complied with the court order, which required that a new contest be called for the awarding of the TV rights of the national championship.

“We are not going to start until the initial contract is delivered, the clubs are the owners of the rights and we reject any political interference,” said Miguel Almeida, president of Universidad Católica, who read the statement.

In addition, it was reported that they resumed the intention to create the Professional Soccer Association of Ecuador (AFPE), a project that had been ruled out, despite the fact that it was approved by the 2017 Football Congress.

On the other hand, the communiqué read that “We suspend the participation of the clubs and, therefore, the Ecuadorian Soccer Championship will not start until it is televised by the person who was awarded with the assignment contract signed with the Ecuadorian Soccer Federation (FEF), a contract that It has been endorsed by all professional football clubs. ” “First we have to give it legal life, through the approval of the statutes by the Ministry of Sport,” said Esteban Paz, of the League of Quito. He also stated that this entity will be the owner of broadcasting rights in the future. (I)