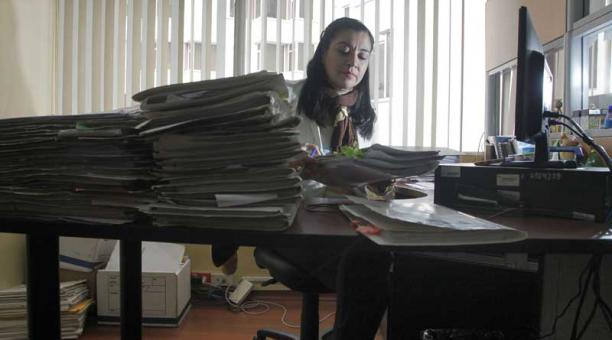 A gun pointing to his forehead. For Milton it is a difficult image to forget. From that April 12, 2017 he remembers everything: the time, the date, the face of the suspect, the tattoo of his hand and the screams demanding that he deliver the money. “That person cannot be loose out there,” he says.

Last Monday he went to the Pichincha Prosecutor’s Office to find out the status of his complaint and if the suspect was already identified. The consultation lasted less than 10 minutes: “No progress”. It has been nine months since the robbery and his case is still under investigation, without detainees or suspects.

In the Rapid Solutions Prosecutor’s Office of Quito, where your case is located, a prosecutor states that he handles 3,000 records a year. “I have complaints since 2015 that continue in preliminary investigation.” The prosecutor Carlos Baca acknowledged that currently there is a deficit of prosecutors that affects the quality of the investigations and makes them be delayed.

851 agents operate in the country, but 400 more are needed to reach the number that is required. Baca admits that each prosecutor handles an average of 600 files a year “and in some places, such as Manabí, that number easily doubles”. That is, currently the agents, if they wanted to dispatch everything, should investigate and solve two daily cases. At this moment, the Council of the Judiciary and the Prosecutor’s Office holds a contest to fill 400 vacancies for prosecutors

“It is impossible not to have cases lagged, if every day here they enter on average 20 new complaints,” says one researcher. In his office, in the Gender Violence Unit, there are reports of 2016 that he has not been able to attend. After patrimonial crimes (robberies), gender violence is the second most reported crime in the country. Until that judicial unit came last Monday Lucía, 58 years old.

On his cell phone he keeps the photos of his mother, 77 years old. Lucia waits in the hall until she can talk to the prosecutor about her case. She wants to explain to the official that her mother was beaten again by her brother. Eight months ago he filed a complaint against him. But so far no psychological or social background has been ordered, which serves to determine the severity of intrafamily abuse. “We need urgent help. My mom is already an old lady, she cannot live this situation, “she says.

Another prosecutor of the Sexual Violence Unit says that in 2017 alone she received 1,900 files, not counting the dam from previous years. The jurist recognizes that she even has cases that have already been prescribed. “We give priority to serious cases and to which people follow up,” the prosecutor accepts. On the other hand, other investigations remain in the background, in which the victims filed their complaints, but never returned, did not give their version or underwent medical or psychological examinations. “We put these causes for another day, because we cannot do more.”

The units of violence against women and against sexual integrity have more workload. To alleviate the work, the 60 new prosecutors will be incorporated until May. The other 60 will go to the prosecutors against corruption, disappearances and human rights and organized crime. Segundo, of 38 years, he asked on Monday a free time in his work to recognize the complaint about the theft of the victim in the entrance of his house. The event occurred two months ago, when he opened the doors of his parking lot, a person entered and took his bike valued at USD 150. “I do not have much hope of recovering my things, but I hope they catch him,” he says. Your case is in the Office of Rapid Solutions. To that dispatch the denunciations by abuse of confidence arrive, by fraud, by robbery of cellular, of houses, of vehicles, of accessories, thefts, injuries, intimidations, etc.

For the amount of the assault, Segundo has not hired a lawyer, but he himself is responsible for finding out his case. Since the robbery, he has visited the Office of the Prosecutor twice. The first was when he filed the complaint and the second was on Monday to recognize signature. Now he will wait for you to call him to give his version. (I)

Associative crops are a development option