The CFN will auction the La Clementina farm in 2023 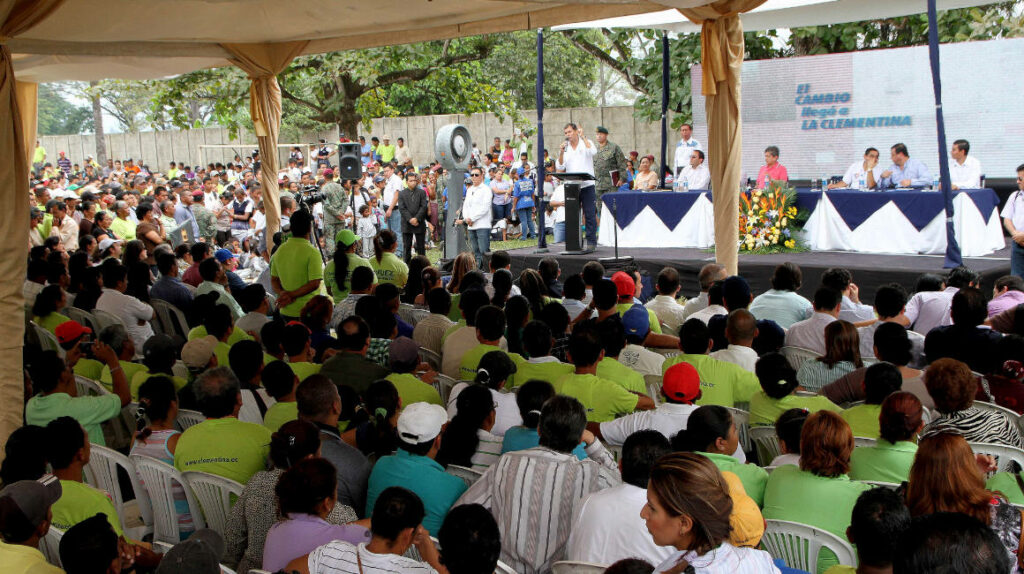 Former President Rafael Correa during a visit to the La Clementina farm in 2013.

The National Financial Corporation (CFN) will auction the emblematic La Clementina banana farm, located in the province of Los Ríos, in the first quarter of 2023.

Jorge Luis Andrade Avecillas, president of the CFN Board of Directors, who has held the position since November 2022, tells PRIMICIAS.

The workers of La Clementina bought the farm in 2014 with a loan from the CFN for USD 74 million, but could not pay it, so the property passed into the hands of the Corporation.

The 10,000 hectares of the farm have been grouped into 18 lots for this new sale. Interested parties may present their offers for one or more lots, explains Andrade.

On the other hand, the CFN seeks to reduce its delinquency rate from 27%, which is the highest in the Ecuadorian financial system, to 10% in two years.

One of the debts that CFN collected in 2022 was the La Clementina farm. When will they sell it?

We will start the sale as soon as possible. We hope to sell the farm in the next three months, at least part of it. We have already had approaches with several interested parties.

How is the sales process going?

The farm has 10,000 hectares, which is why we first carried out a subdivision process, which ended recently.

The largest lot, 3,000 hectares, corresponds to banana crops. We divided the rest into 17 lots, in which there are crops of teak, citrus and short-cycle products.

The idea is to sell the entire farm or lots, in a public and transparent auction. We even analyze approving a credit to the interested party for part of the purchase.

But we still have to do the terms of reference.

How much do you expect to sell La Clementina for?

The farm would be valued at around USD 93 million, but we expect to earn a profit above that, we still don’t know how much more it could be.

We will hire a company to do the valuation of each lot.

What will happen to the workers who owned La Clementina?

It is possible that they buy a part of the farm, we are analyzing what that process would be like.

The problem is that they got into debt for a farm in which 70% of the hectares were unproductive and it was very difficult for them to pay the CFN.

In addition to the debt of La Clementina, how much was collected from the large debtors in 2022?

It has not yet been possible to collect anything from the almost 90 large CFN debtors, but we made some embargoes. The problem is that they have brought us 49 legal actions, such as mediation and protection actions, which can delay the coercive payment for a year or more.

For example, the owners of the Sail Plaza de Manta hotel, which are the largest debtors, requested mediation. They have to submit their income and a payment proposal.

We are open to reaching agreements with everyone. It is not our idea to bankrupt anyone.

How long will those agreements be?

We will not refinance according to what the client requests, there are debts that have been due for 10 years and they ask us for terms of 30 years.

We will analyze the cash flows of the debtors and we will see their payment possibilities.

How will you expedite the debt collection process?

We redesigned the portfolio recovery department, in which around 100 people will work.

We will strengthen the coactive area. One of the strategies is for 80% of coactiva values ​​to be handled by CFN lawyers. These processes are now in charge of external advisors.

The goal is to collect everything.

We have collected USD 266 million in 2022, of which USD 200 million are loans that are being paid normally, and USD 66 million are overdue portfolio collections.

What are the credit placement projections for 2023?

We will strengthen CFN as a second-tier bank; that is, as an institution that gives credit to financial institutions, which will be in charge of placing loans for the productive sector in good conditions. First-tier banking (ndr, direct credit to companies) is no more.

The World Bank has already approved a loan for USD 100 million for CFN and we hope that this month it will approve another for USD 200 million. With that, and our own resources, we will place USD 500 million in 2023.

Influencers and informal e-commerce are in the SRI’s sights