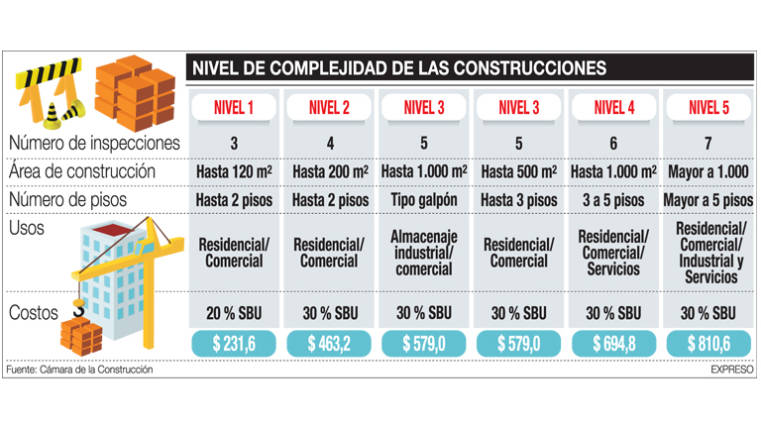 One year after the approval of the ordinance for the control of buildings, the Chamber of Construction of Guayaquil will begin with the inspections of the works that have permits approved by the Municipal Urbanism Directorate. A delegation that is carried out because the department does not have the necessary personnel to execute this control.

This measure, anticipated to EXPRESO in March of last year, was analyzed and approved after the authorities noted the structural consequences of the 7.8 earthquake that shook Ecuador in 2016 in the homes and buildings of the city and whose cause -until that moment- was just an open secret.

“We have to admit that there is a lot of informal construction in Guayaquil, because (people) believe they save money by building with construction masters, without realizing the risk that means,” says Enrique Pita, president of the Chamber.

From next Wednesday (August 1), all works whose permits are approved will have to go through a series of inspections that will be carried out by architects and engineers accredited by this institution. Each control will have a cost that must be borne by the user and that varies according to the size of the construction area and the number of floors.

The simplest buildings must add $ 231.6 to the total value of his work. That is, $ 77.2 per inspection, which represents 20% of the unified basic salary. An item that for Viviana Tello, who is currently building the second floor of her house in the Villa Bonita sector, could mean the postponement of construction.

“So far I have spent almost 5,000 and to finish we will have to invest another 3,000. That money is not mine, it is a loan that my husband made in his company and if I have to pay a supervisor, we will have to borrow more, “she says surprised.

So far, its construction is not within the works to be inspected because it is already started, but if you decide to postpone it and get another permit, you must include the value in your new budget.

This price must also be paid by the builders of the developments and buildings for commercial use.

“This control was not done. Only the final inspection, when the work was finished, when the citizen asked for it, but the construction process was not revised in stages. It is a plus to the control of the construction “, mentions José Miguel Rubio, director of Town Planning of the Municipality.

With the ordinance and with the new rates, the payment for the final inspection of ‘2.00 per thousand’ was eliminated, referring to the final price of the construction and which was lower than the current payment.

Currently, the Chamber has 29 delegates approved to carry out this work, which will consist of creating a schedule of visits with the owners and technical managers of the work. This will depend on the time the workers take to build the foundation, the slab and the roof. The three stages that the Cabildo requests to be reviewed.

“The notaries go to the work, review, take pictures and pass a report. All this is entered on the site and through an application that shares the data in a way. The manufacture of the booths is online between the Municipality and the Chamber, “Rubio says. Who adds that the power of decision falls exclusively on the Municipality, with the aim of avoiding any irregularity. If the inspector detects that the work does not develop according to the initial plan, the report passes and the Cabildo stops the work.

According to figures from the Municipality, 1,200 requests for building permits are processed monthly, of which only 600 are approved. (I)