The “Chiriboga Era” reaches its end 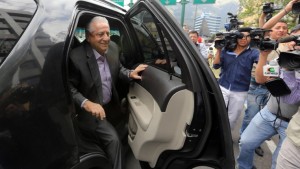 Luis Chiriboga Acosta will quit his post as president of the Ecuadorian Soccer Federation (FEF) this next Tuesday, according to his lawyer, Juan Carlos Machuca.

Chiriboga, age 69, is being investigated by the Prosecution because of money laundry charges.

He is also involved in a report written by the US Department of Justice, where it is mentioned that Chiriboga was part of the fraudulent transactions done in the FIFA, one of the biggest international scandals.

Chirbiboga was suspended from his post for 90 days. Yesterday, the deadline was met.

“Chiriboga’s resignation is one of the alternatives to reduce the pressure created by the media and by those who seek to be president of the Ecuadorian Soccer Federation” stated his lawyer, Juan Carlos Machuca. (I)