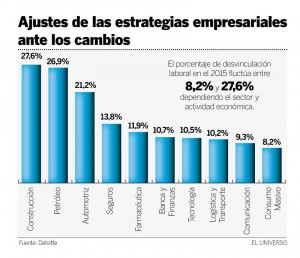 Sectors with the highest percentage of labor termination during 2015 were construction (27.6), oil (26.9%) and automotive (21.2%), according to the Economic Situation of Ecuador and its impact on the wage and labor market: Reality, analysis, changes, strategies and prospects report of the consulting firm Deloitte.

These sectors, according to the report, are the least likely to make salary increases in 2016. This analysis, as the consulting firm precises, is based on information gathered during the survey of wages made to 166 multinational companies and 205 domestic enterprises.

The document explains that the outlook for these three sectors was complex. It specifies that in the banking and financial sector “loans have contracted due to low market liquidity” and 22% of the institutions of the sector did not increase their salaries.

In the automotive case, “the reduction in the car import quota generated that 42% of the three companies of the sector do not perform a salary increase in 2015.”

For the oil sector the impact was due to the fall in international oil prices.

According to the document, the general rise in salaries for 2016 would be 3.5%. The projection specifies that the industrial sector would have the highest increase with 3.8%; trade, 3.5%; and services, with 3.2%. The average salary rise would be the lowest since 2009, according to data of the company.