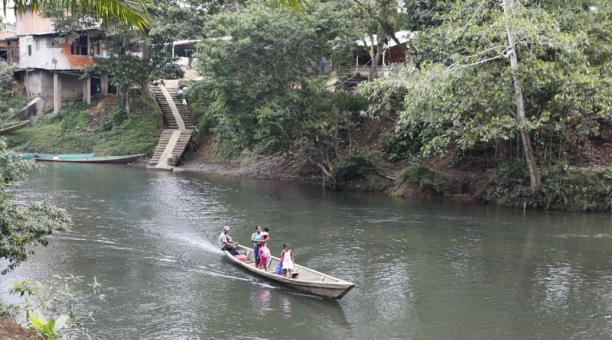 Almost no transporter from Tumaco (Colombia) wants to go to Puerto Rico. The Colombian town, which is located in the jungle zone of Nariño, is one of the operations centers of alias ‘Guacho’ and its Óliver Sinisterra front.

Militars from Colombia, who spoke with this newspaper confirm it and say that among its missions is to recover that sector. They mount operatives to reach that Colombian population, but the FARC dissidents attack them with machine guns, rifles, bombs or mortars.

For example, that happened in October of 2017. Four peasants were killed by the attacks of the armed. That is why the military enters and leaves and the incursions are made with more than 50 troops. They do not have barracks in that town, nor do they have police checkpoints. This has caused the dissidents to have control of the population.

This is indicated by Inredh, a human rights organization in Ecuador. The investigators of Inredh have visited Puerto Rico and say that the armed ones have total control. Dissenters give people health services, food, water, electricity and even sources of work. They do everything in exchange for continuing the cultivation of coca. In fact, the Colombian Government’s crop substitution program does not reach that sector.

The irregulars do not allow it. They have threatened the peasants with killing them if they accept the help of the Government. This information has also been confirmed by Colombian soldiers operating in Tumaco.

But since January of this year, the interference of the armed ones has also affected the Ecuadorians who live in the border cord, especially the towns of Corriente Larga and La Cadena. The two sectors are points of passage that unite Puerto Rico with San Lorenzo. The two locations are about 35 minutes away. That closeness has made the irregulars use San Lorenzo as a point of supply of food, beverages and cleaning supplies.

In fact, from the San Lorenzo market there are vans that leave every two hours for Corriente Larga. Once there, people must cross the Mataje River and on the other side is the entrance to Puerto Rico. Until two months ago, Ecuadorians entered without fear. But at the beginning of March, the armed began to prohibit the entry of nationals.

The situation was aggravated by the plagiarism of Óscar Villacís and Vanessa Velasco. The couple was detained in Puerto Rico in mid-April and their whereabouts are still unknown. His family will travel to Colombia on Sunday, June 3, 2018, to request information from President Juan Manuel Santos.

A San Lorenzo policeman also knew of the interference of the armed in Puerto Rico. In the chats that a major kept with alias ‘Guacho’, the insurgent tells him that he wants to meet and go to the entrance of Puerto Rico with a government delegate.

The officer indicates that he is looking for the delegate. In another message, the irregular threatens to kidnap and kill civilians who are on the border. In the last two months, the military says they are constantly patrolling Corriente Larga and La Cadena. On May 1, the irregulars attacked the soldiers with mortars from Puerto Rico. People in these areas are afraid of more attacks. Some have left their homes to avoid being victims of dissidents. (I)