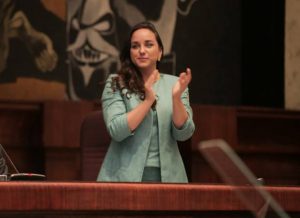 74 votes of the legislators of Alianza PAIS, plus three votes of the Izquierda Democratica, Sociedad Patriotica and Movimiento Creyendo en nuestragente parties gave Jose Serrano a landslide victory as president of the National Assembly.

Serrano, who will remain two years in charge of the Legislature, received 77 votes in favor, 31 against, 2 blank votes and 26 abstentions from the opposition blocks.

Viviana Bonilla and Carlos Bergmann were elected as first vice president and second vice president respectively.  Soledad Buendia (AP), Veronica Arias (AP-ARE) and Luis Fernando Torres (PSC) were elected as members of the Administrative Council of the Legislature (CAL). The nomination of the representative of the SUMA-CREO party was suspended. The AP block opposed.

For the election of the fourth member of the CAL, the plenary will meet again next Wednesday. This session also aims to integrate the twelve permanent specialized commissions and the Audit Commission.