The crisis deflates football; the deficit is $ 60 million 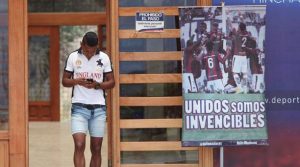 Football players fainted during the practices of Deportivo Quito. They trained without having breakfast. Eddie Guevara, of Esmeraldas, tells they were scared and anxious because there was not even water in the Ney Mancheno complex in Carcelen (north of Quito). The defender, 26, remained unemployed for the decline of the ‘AKD’ to the second category. Neither he can play elsewhere. Registrations are closed in the series A, B and the second categories until next year.

He has the support of his family and his savings to survive. Now he trains on his own. Deportivo Quito enrolled 64 players this year to participate in the tournament of B series. They stayed unemployed and have not been paid six months. In addition, they stopped training. “I have charged February in seven installments. We signed the payrolls without getting paid. We did it to not lose points,” says Guevara, who arrived three years ago to the ‘AKD.’

The crisis in football is evident. In serie B clubs there are about 120 players who have not been paid their wages and have already complained.
The rules of the FEF forces the teams to present payrolls up to 30 days late, a rule criticized by the guild of players. When they fail to comply they are punished with the subtraction of points in the FEF. “In Olmedo and Liga de Loja players were asked to sign unpaid rolls. There are permanent claims because our members subsist on the little money they are paid,” complained Jorge Guzman, director of the Ecuador Football Players Association (AFE for its Spanish acronym) (I).
Source: http://www.elcomercio.com/deportes/crisis-futbol-ecuador-deudas-equipos.html

“The audit is not negotiable,” says Andersson Boscan

Verification of signatures will cost $ 106,000 according to the National Electoral Council