Ecuadorian cyclist Alfredo Campo reached fifth place in the BMX racing Olympic final at the Tokyo Olympics on the night of July 29, 2021. 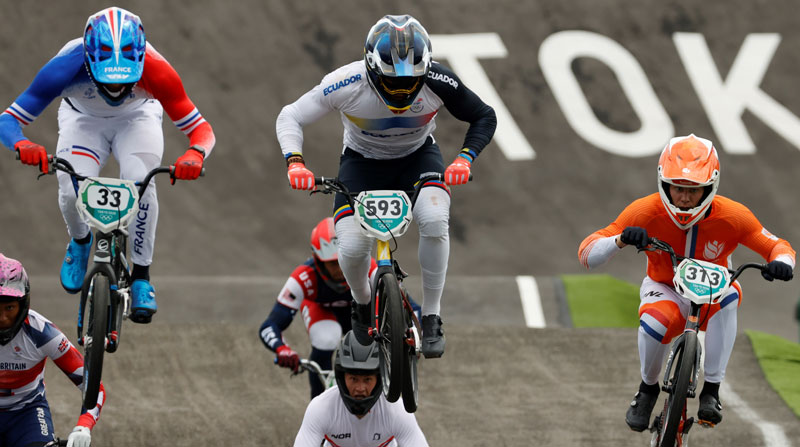 Alfredo Campo from Ecuador (center) qualified for the Olympic final in Tokyo, at the Ariake Urban Sports Park in Tokyo.

The winner of the test was Niek Kimmann (Netherlands) and second was Kye Whyte (Great Britain). In the exciting test, the Colombian Carlos Ramírez reached the bronze medal.

Campo fought for the podium until the end and placed fifth. Thus, he reached the Olympic Diploma. “A dream come true,” said the tricolor after running the Olympic final.

“I really felt their strength and support from 17 million Ecuadorians, today we pedaled together at the entrance starter, and I hope they have been encouraged, excited in those 30 seconds of competition. The truth is that for me that is worth more than any gold. “, He added.

Campo said he felt “blessed and grateful to God for having given me the opportunity to be in an Olympic final doing what I like the most, representing my country. It is something that I will always be proud of”.

“You have to have the courage to get up and keep fighting, keep believing,” said the 28-year-old athlete who raced the Olympic final with his own brand of bicycles.

“A BMX final is one of the most beautiful sensations for me. Leaving here without an injury is already a victory, “he added.

The Azuayo, very involved in his competition, placed second in rounds 1 and 2, while he came fourth in the third. With that, he reached a place in the Olympic final at the Aomi Urban Dep. Park.

The BMX racing semifinal tests were delayed 45 minutes due to rain.

In the women’s tie, Colombian Mariana Pajón reached the silver medal. The winner of the test was Bethany Shriever from the UK.

Campo, 28, raced in the second semifinal tie. His qualification to this phase was memorable.

On July 28, in the first of the three qualifying heats, he suffered a severe fall. However, the athlete rejoined to continue in competition and reach his passage to the semifinals.

Campo left Ecuador at the age of 16, to settle in Florida, United States, in order to improve his technique and sports preparation.