The demand for housing plans recovered in the country 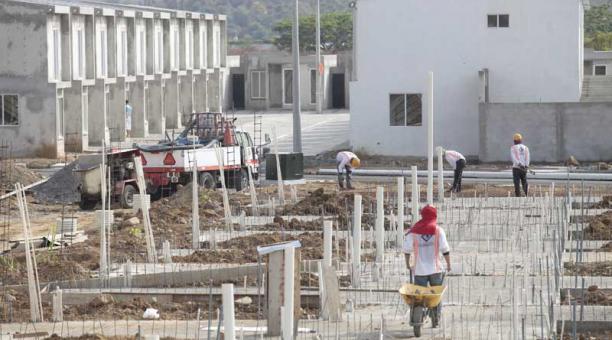 Sales, reservations and customer visits to housing projects had a rebound from October 2017, but builders warn that there is still no talk of a recovery in the sector. After nine quarters of negative figures in construction, the number of housing reserves increased.

The Association of Real Estate Developers of Housing of Ecuador (Apive) calculates that in October of last year the number of housing reservations rose by 14.7% with respect to the previous month. The reservation refers to the payment of a part of the cost of the property to the developer in order to separate the home that will be delivered in a period, usually 24 months. For Apive, one of the factors that explains the figures of the last quarter is the inclusion, in the popular consultation, of the question about the elimination of the Law of Goodwill. But this is not the only element that started in an improvement of the indicators of the sector in the last quarter of 2017. Another element was the strong indebtedness that the Government got during 2017 and that finally translated into greater liquidity, which was, in part, to the purchase of homes, according to builders.

Another element to consider, according to the builders, is that the results of the reserves of October last year will be seen only at the end of 2019, when the finished houses are delivered, “so we cannot talk about recovery,” Enrique Pita, owner of the Chamber of Construction of Guayaquil.

The real estate sector represents 60% of all construction activity. The rest includes public works, which also have been falling since 2014. Although there were more reserves, visits and sales in housing projects, construction will close with a contraction of 4.8% in 2017, according to the latest projection of the Central Bank of Ecuador

For builders, the Economic Reactivation Law, which is already in force and which provides incentives for exporters and small and medium-sized companies, will not be enough to promote a recovery in activity during this year. The manager of Furoiani Obras y Proyectos expects that the repeal of the Capital Gains Law, if any, will contribute to a real boost of the sector this year. The Central Bank projects that this activity could grow during 2018 at 1%. The real estate sector sees with expectation the so-called Casa for All Plan promoted by the current Government. To finance this program, the Central Bank approved at the end of last year a financing of USD 185 million, which will be channeled through public banks. The projection is to build some 325,000 homes in the next four years.

For Jaime Rumbea, spokesman for Apive, the effects of the program in the sector will depend on the openness that exists for private participation in the construction plan and the reduction of paperwork in the approval of projects in the municipalities of the country and that today are a hindrance.

In May 2015, the Government announced the sending of the Goodwill Law to regulate extraordinary gains in the sale of real estate. This affected a drop in real estate sales. (I)