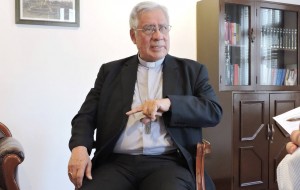 The president of the Ecuadorian Episcopal Conference (CEE), Fausto Trávez, in an interview with El Universo, announced that on Thursday, September 3, they will meet to not only address the issue of the letter sent by President Correa to the Apostolic Nunciature by the statements of the Archbishop of Guayaquil, Antonio Arregui.

In addition, they will address subjects as the low oil prices, the strikes, the border with Colombia, the Cotopaxi volcano, the stock market crash in China, etc.

“We have to unite; we must be united by the brotherhood, the dialogue and the understanding, because if we begin to judge, to attack us, we create disunity and create another battlefront instead of solving the problems we already have. Travez expressed what would be his proposals for these problems.

He also said that Alexis Mera must approach the Archbishop Arregui and make peace. And he believes that all Ecuadorians must be united. “I do not want to blame anyone, because the biggest mistake of a leader is looking for culprits; before the problems we must find solutions.”