The Ecuadorian President will not set a reunion with SOLCA, because they keep lying 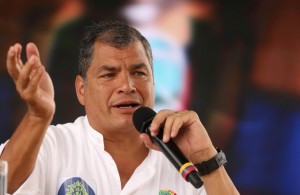 The Ecuadorian President, Rafael Correa, has warned today that will not meet SOLCA, as announced on Wednesday, if the institution does not acknowledge that they have lied.

“So if we do not clarify these things, I will not accept, I’m not going to lend to half-truths, but here are recognizing that we have paid them have to recognize all!”

“How can they say they were 130 million which were owed, if they are acknowledging that they had made payments in the first quarter. SOLCA is given two types of income: one that comes from 0.5%, which is about 15 million that had been paid when they took the “periodicazo” scandal! And what would any private clinic: the Ministry of Health refers to a cancer patient SOLCA, and pay for it to SOLCA. It is one of those services that must, until a few days ago just audited 22 million dollars. And there are another 27 million to be audited. So, in practica, we just owe less than 25 million dollars right now. So, stop lying to the public!”.