The eternal debate on the Dhruv helicopters 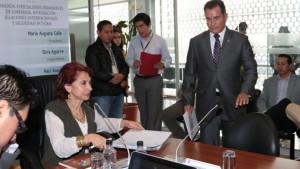 Another element in the investigation of the purchase of the Dhruv helicopters helicopters. This is the document sent to the International Relations Commission by Air Force (FAE) General Alonso Espinoza. This builds up to the long list of pages the case already has.

Espinoza, former head of the Air and Defense Operations Command, had to attend that meeting of the Assembly, but he apologized.

The president of the commission and Congresswoman of the ruling party Maria Augusta Calle showed that report at the end of the hearing of former commander of the FAE Rodrigo Bohorquez.

According to that text, former commander of the FAE Jorge Gabela, who was assassinated in 2010, had “an interest to award the purchase contract of the ships to the Israel company Aerospace Industries (IAI),” read Calle.