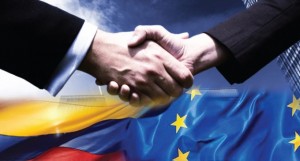 The European Union (EU) considered  “very ambitious”  signing the trade agreement with Ecuador, since it enssured it exists “important issues” to discuss on the table. According to a spokesman for the European Commission.

“Only when these issues are satisfactorily resolved, we will be ready to conclude” negotiations for the incorporation of Ecuador to the Multiparty Trade Agreement with the EU, which already includesColombia and Peru, he added.

Since this week the third round negotiations between Ecuador and the EU is being held in Brussels. The Commission noted that the negotiators discussed this time on market access for goods, services and public procurement as well as “issues are pending in the agreement text.”

Last week, the Ecuadorian President Rafael Correa said he expected the country to sign a trade agreement with the European Union “this year”, because in December the country would lose tariff preferences.