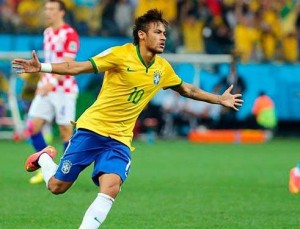 Brazil defeated Croatia 3-1 on what was the first game of the 2014 Brazil World Cup at Arena Corinthians.

The Brazilians were surprised in the 11th minute, after a Marcelo own goal in his own goal. However, found the draw at 29 min through a shot from outside the area from Neymar.

Already in the second half, 70 minutes, Neymar scored again with a penalty kick after a foul to the forward Fred.

Near the end of the game, 90 minute, Oscar was responsible for close the result scoring for Brazil and reach the 3-1 with which it finished the game.

Thus, the team of Luis Felipe Scolari achieves its first 3 points in this World Cup.

Brazil invests $ 900 million in security for the World Cup