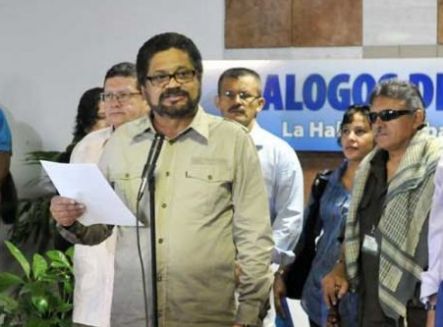 The FARC reported on Sunday in Havana that the Colombian army intensifies the “siege” against their units in the Llanos Orientales and the Cauca, which endangers the unilateral and indefinite truce declared last December 20.

“The military siege against guerrilla units in truce intensifies in Llanos Orientales and the Cuauca,” said a press bulletin posted on the site of the negotiating delegation in Havana,pazfarc-ep.org.

Among the military actions, the insurgent group cites a bombing last December 24, by “four aircraft from the Air Force in El Trapiche area, on the banks of Caño Siare, in the department of Guaviare (southeast).”

In addition, according to the FARC, on January 1, 4 and 5, the Colombian Army strafed, bombed and landed troops in areas close to its guerrilla units, with a balance of a wounded guerrilla man.

“If the government really wants to get to the signing of a Final Agreement, their deeds should be consistent with the discourse of peace. The majority claim it, and patience is running out,” says the guerrillas.

On December 20, the guerrilla negotiating delegation announced the entry into force of a unilateral and indefinite truce, which would remain unless the army attacked their units.