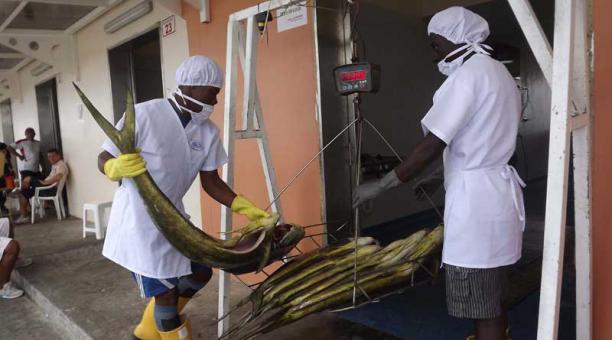 The catches of dorado, black marlin, catfish, white marlin, corvina, albacore, bonito, mackerel, and murico, have decreased in the last five years. According to Juan Benincasa, president of the Fishing Exporters Association, temperature changes in sea currents and rains would be the cause of the shortage since 2015.

Last year production fell by 50% and exports decreased by 30%, mainly to the United States and Europe. USD 120 million a year are normally exported, but in 2016 only 70 million were exported. The main export species – dorado – represented shipments of 2.1 million kilograms to the US, last year (the half compared to 2015).

In the ports of Manta and Jaramijó (Manabí), Santa Rosa (Santa Elena) and Esmeraldas, fishermen state that catches have decreased in comparison to other years. 15 000 vessels were engaged in artisanal fishing in the country. Janine Plaza, a biologist responsible for the Esmeraldas Fisheries Inspectorate, believes that pollution is another factor for the alienation of marine species from the coast, making it difficult to catch them.

Byron López, head of the Department of Fisheries of the Jaramijó City Hall, says that 70% of the fishermen in this area is engaged in the catch of white marlin, swordfish, and catfish, but during this season they barely capture the minimum.

PAIS Alliance, a not so wide majority and at the expense of not having defectors