BREAKING NEWS
National Electoral Council endorses Álvaro Noboa as candidate, despite litigation by his political party
Galapagos, the desecration of the marine sanctuary
Adelante Ecuatoriano Adelante Convention chooses Álvaro Noboa as its presidential candidate
Former President Abdalá Bucaram Ortiz, arrested in a strong police operation in Guayaquil
Israeli Shy Dahan was assassinated in Prison while implicated in the sales of medical supplies to Jacobo Bucaram
Organizations warn about threat to Xavier Bonilla, cartoonist for the newspaper EL UNIVERSO
CNE denied challenges from three canceled political organizations
Adelante Ecuatoriano Adelante faces third cancellation resolution in the Electoral Council
Lasso is trending on Twitter: ‘The one that appears in a video that circulates is me’
Tax law benefits are already applicable for bananas and other sectors

The fugitive number 17 was recaptured 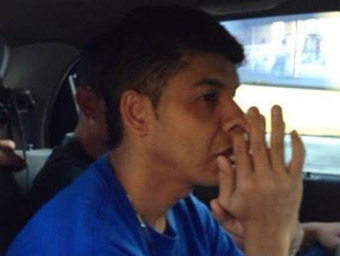 The Minister of the Interior, José Serrano, announced last Tuesday through his Twitter account that Eddy Castro Cabello, known as Bemba, another of the fugitives who escaped from the maximum security prison located in Guayaquil known as La Roca, was recaptured in Colombia.

The official also published that ‘Bemba’ is the number 17 of the 18 escapees of La Roca jail, and took the opportunity to thank the Anti crime intelligence unit (UIAD), and the police of Colombia for their great work.

Last February, 18 convicted criminals escaped from La Roca,  among them,  are the leaders  of the gangs ‘Los Choneros’ and ‘Los Templarios’.