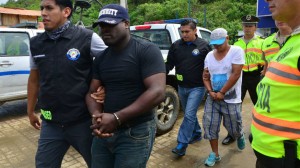 The arraignment hearing against P.M. and “the Red,” suspected of killing Argentine tourists Marina Menegazzo (21) and Maria Jose Coni (22) in Montanita will be held today at 8:30, announced Attorney General Galo Chiriboga.

The procedure will be held in the Judicial Unit of Manglaralto (Santa Elena), the official reported on his Twitter account.

Defendants request that Rafael Correa reconciles the case of land