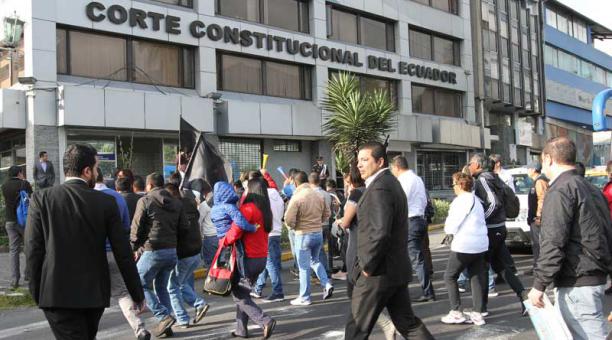 The Ecuadorian Institute of Social Security (IESS) will begin to collect 40% of the state contribution as of 2019, according to the ruling issued last Wednesday, March 21, 2018 by the Constitutional Court. The judicial body declared the unconstitutionality of Article 68.1, in the second and third clause of the Labor Justice Law, in force since 2015.

This rule replaced the fixed contribution of the State of 40% for the pension fund by a guarantee that applied only when Social Security does not have the financial resources to cover the obligations in course of payment. But the ruling will have general effects for next year. The Court established that the contribution “must be considered mandatory at the time that the preparation of the budget pro forma for the year 2019, in accordance with the provisions of Article 294 of the Constitution of the Republic.” Says the document.

The National Front of Retirees of the IESS was congratulated yesterday by the sentence of the Constitutional Court. “We had been waiting for this decision for 180 days since we filed the lawsuit, in April 2015, because we felt that Social Security was progressively going bankrupt,” said Francisco Ortiz, president of the union. However, the group expected the ruling to be carried out retroactively. He stressed that the State must cancel the Insurance USD 4,400 million for what was left to contribute to the entity since the law came into force until the current year, plus interest. “If it is not retroactive we would be looting,” said Ortiz.

From USD 1 100 million budgeted by the State for the IESS in 2015, the contribution fell to USD 200 million annually and this year only USD 220 million were budgeted, of which USD 153.7 million will be destined to pensions. The retirement fund maintains a budget deficit that forced the entity to resort this year to a new divestment of USD 1 669.6 million, to cover the expenses of benefits, because the income from contributions by members is not enough. Although the payment is made in 2019, financial analysts believe that the lack of state payment between 2015 and 2018 will increase the financial deficit of the entity.

For Fausto Ortiz, former Minister of Finance, the most worrying thing about this is that it will be a permanent expense that Finance must fund with permanent expenses (taxes). “Permanent revenues in 2015 barely exceeded permanent expenditures by USD 1.6 billion. In the pro forma 2018, that surplus was reduced to 600 million, “he explained.

The annual contribution of the State to the IESS is calculated above USD 1 billion per year. The economist Jaime Carrera calculates that this will increase the fiscal deficit by at least one additional point of the gross domestic product (GDP). “There is no liquidity. They should cancel it in the margin of a fiscal program until 2021, and within that establish a program to be done through bonds, but it is more public debt”

Regarding the elimination of the limit of 24 basic salaries to the profits received by workers, the judgment states that the declaration of unconstitutionality will have effect for the 2017 fiscal period that is, for the profits received by workers this year. Rafael Oyarte, constitutionalist and who presented one of the demands on behalf of a group of workers, criticized the delay in the pronouncement of the Court, because he believes they could be more diligent. (I)

Ecuador and Colombia agree to strengthen cooperation and intelligence Exchange