The instants of arrests and attacks outside the Assembly 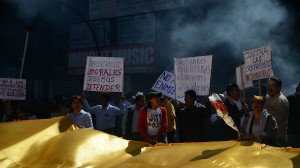 This Thursday, in the surroundings of El Arbolito park, located three blocks from the National Assembly, the clashes between hundreds of demonstrators protesting against the constitutional amendments and the police were exacerbated.

It was 18:00 when the amendments had already been approved and the protesters started throwing stones and sticks at policemen to break the fence. An antiriot truck came out from a side street and sped towards the protesters. They ran towards the park to avoid being run over.

In their desperation, people were falling off sidewalks and paths. Hundreds of police officers took advantage of the shock to make arrests. They attacked the complainants with batons and kicks, before arresting them. There were dozens of detainees.  Some of them were dragged by police agents, others were transported on motorcycles.

Diego Pallero, photographer of Daily El Comercio, was hit. He said he was filming the aggression (you can see the video) in which an agent was beating up a young man and two female agents tried to prevent it. At that time, he added, a policeman hit his ribs with a baton. “I lost my breath and I could not continue recording. I fell on the ground because I couldn´t keep walking,” he said. The help of his colleagues chased away the police agents.