The jump from the break to the presidential ‘romance’ 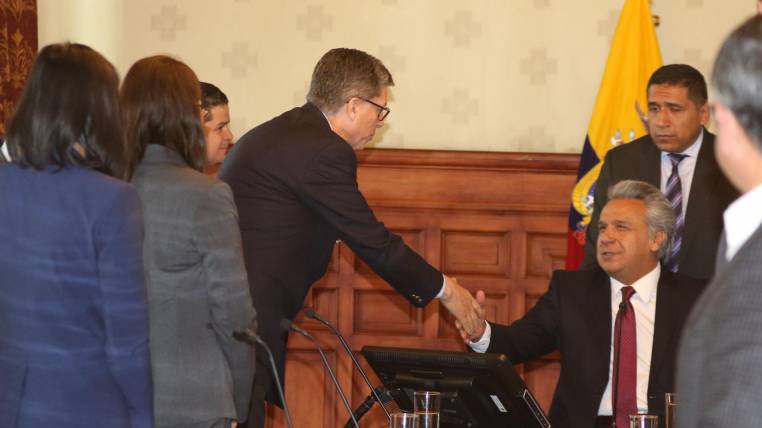 The outstretched hand goes beyond borders. Denounced until recently, several organizations and social actors of the international arena have once again set foot in the Carondelet palace in the last year. The result? Their perception of the situation in the country is improving, although with reservations.

The proposal of reforms to the Law of Communication, raised by the Government of President Lenin Moreno, was the last action that attracted the organizations defending freedom of expression to the country.

The director for the division for the Americas of Humans Rights Watch (HRW), José Miguel Vivanco, met yesterday for more than an hour with the president. The meeting not only served to talk about the work of the press, also about the problems that Ecuadorian social organizations continue to face, the lack of judicial independence and the little that, according to HRW, we have advanced in foreign policy with respect to the past decade.

“We support the efforts that the Government is making to recover spaces and respect for public liberties (…) but there are also pending some locks that are at the constitutional level that are a series of rules for media that fall into subjectivity” said Vivanco.

Like the Inter-American Press Association (IAPA), which visited the country last week after 15 years and met with Moreno, Humans Rights Watch was harshly criticized by former President Rafael Correa during his three consecutive terms.

But they were not the first to talk to the president. In November, the doors of the Presidency were opened for the delegates of the International Monetary Fund (IMF), something unthinkable with its predecessor. The meeting even caused mistrust among Moreno’s own supporters who still keep Correa in his heart and his positions on economic matters.

And, although the country has not reached a financing agreement with this multilateral organization, its presence caused a significant impact, so much so that the IMF estimated, in January, the growth projections of the country above the expectations of the Central Bank, as published EXPRESO.

Those who are to come, also went through a similar situation for ten years. After a campaign to remove protagonism and financing, which in practice had no effect, the Rapporteur-ship for Freedom of Expression of the Inter-American Commission on Human Rights (IACHR) will return to Ecuador at the invitation of the Executive.

This came hand in hand with the Ecuadorian decision to go to the Organization of American States (OAS) in search of support in the face of growing violence on the border with Colombia. Until recently, UNASUR had become the preferred agency to deal with these regional issues through the self-proclaimed citizen revolution.

After eight years of freezing in relations with the United States, President Lenin Moreno has met with at least four officials from that country to address issues of cooperation and trade. In that group was Thomas Shannon, undersecretary of State for Political Affairs of the United States.

Ecuador had the support of US FBI agents to investigate the explosion at a police station in San Lorenzo in January. In March, a high-level mission of the Southern Command visited the country and greater cooperation was agreed on security and defense issues. (I)