The Law that Caused the Police Uprising was Approved 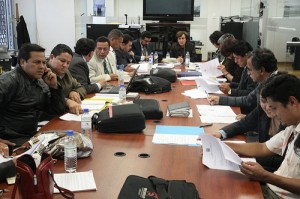 The project for the Organic Law of Public Service that reduces the salary of police officers and military has been approved. The same law that provoked the uprising of last Thursday, the National Assembly confirmed that the authorization was done automatically. The source of the statement maintained its identity anonymous.

The legislature didn’t pronounce the pending points of the law until Sunday midnight, the last day for its approval. This allowed the law to be automatically approved according to the regulations of the Chamber.

The regulation will began once it is published in the Official Registry of Ecuador.

In general this law reduces several income benefits of public servants. The Main Assembly, which is dominated by Correa allies who had approved an exception for the police and the military. However the Ecuadorian leader disallowed this disposition.

Last Wednesday, 77 members of the assembly voted on favor to revoke this veto, but their number didn’t reach the 83 needed to obtain a favorable result. This defeat motivated police officers and a small number of military to protest on the streets on last Thursday. This ended up with the kidnap of the President for almost an entire day.