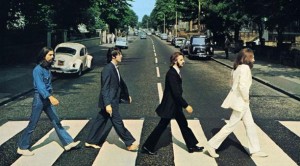 On August 8, 1969, John Lennon, Paul McCartney, George Harrison and Ringo Starr posed for one of the most famous photos in history.

Outside EMI Studios on Abbey Road (London), Iain Macmillan photographed The Beatles crossing the zebra pedestrian, getting an image that became a must for fans of the English group referent.

The photo was the cover of the album ‘Abbey Road’, which was published on September 26, 1969 and contains songs like Come Together, Something and Here Comes the Sun

Since then, thousands of fans have mimicked the composition of the photograph, which sees Lennon, McCartney, Harrison and Starr crossing the road.

In fact, hundreds of Beatles fans gathered at the crosswalk to celebrate the anniversary. Among them were the cast of the musical ‘Let It Be’, which is currently presented in the West End of London.

That morning in 1969, Macmillan had only ten minutes to take the picture, since the police had to control traffic in the area.

On the cover the group can be seen walking from left to right, led by Lennon, who come after Starr, McCartney (barefoot) and Harrison.

At the bottom of the photo highlights a white Volkswagen Beetle and you can also see an unsuspecting man, Paul Cole (American tourist), who did not know he had been photographed.