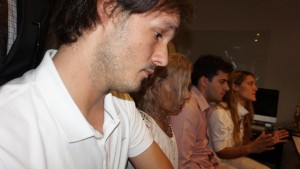 The family of the victims was calmed, but not stopped externalize anger, helplessness and, above all, pain; not only for having lost a loved one “all of a sudden” but also for the extra pain they suffered before the disrespect they saw in some media against the victims, Marina Menegazzo and Maria Jose Coni, killed in Montañita.

Gladys Stefani, the mother of one of the deceased, opened the dialogue with the Ecuadorian press apologizing. “At the time I arrived at the country, I was feeling the worst, I could not believe what was happening… I apologize” said Maria Jose’s mother.

Stefani now prefers not to obstruct the investigations carried by the prosecution but she can not help to question the expressions provided by Maria Cristina Rivadeneira, ex Subsecretary of Tourism, who declared that “these girls would have suffered the same fate, elsewhere, sooner or later…”.

“Any ignorant can say tremendous outrageous statements, but as an official, she left a terrible impression about Ecuador and the consul that was just standing next to her.” (I)