The Prosecutor´s Office will accuse Jorge Glas, his uncle and the former Comptroller General of unlawful association 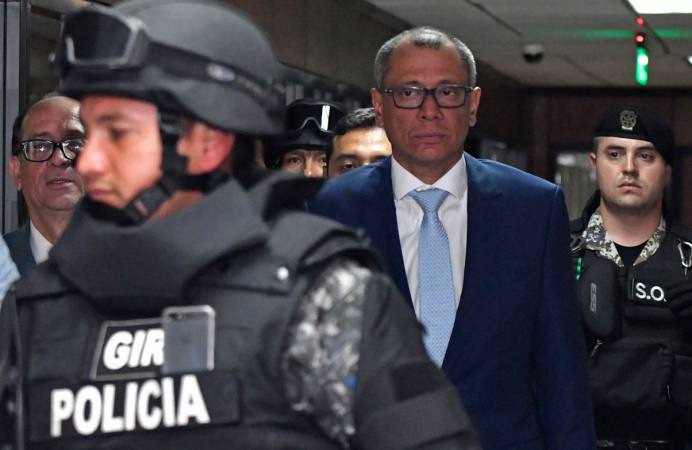 An indictment charge against thirteen people, including Vice President Jorge Glas, his uncle Ricardo Rivera and former Comptroller General Carlos Pólit, and an abstention opinion that favors the Equitransa official, José Catagua, and four former Odebrecht directors in Ecuador, among whom is José Santos. The measure summarizes almost six months of an investigative process for the crime of unlawful association related to acts of corruption.

Yesterday, after several appeals filed mostly by Glas´ defense, the preliminary hearing of judgment in this case was installed. Shortly before, Eduardo Franco, lawyer of the vice-president, raised the voice when being notified of the abstention opinion, in the middle of a hectic National Court of Justice.

He claimed that leaving the Brazilians free is a “criminal action” by Prosecutor Carlos Baca and asked for his detention. He repeated it constantly at the hearing, and Judge Miguel Jurado admonished him. Baca said he would not fall for provocations and asked the judge not allow any sort of “street discussion.”

“The power of Odebrecht is incredible: it puts a vice president in jail, and manages that its officials go unpunished. What does the ‘company’ know?” Ecuadorian President Rafael Correa wrote yesterday on his Twitter account. (I)

Companies increased salaries by 2.37% in 2017, according to a study

Baca labels Jorge Glas as the author of unlawful acts