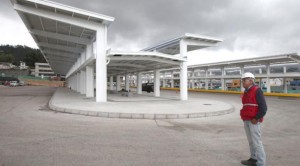 The Metro project for Quito was not included in the General State Budget of 2015, confirmed the Ministry of Finance. “it is not contemplated because it is not a decision of the Central Government, but of the Municipality of Quito. But as soon as the Mayor decides, a budget amendment will be carried into effect and the offered part by the Government will be included, which is financed,” added the Portfolio state.

On December 3, President Rafael Correa confirmed that the state will provide $ 750 million to the work, but the municipal aspirations exceed that amount. ($ 850 million).