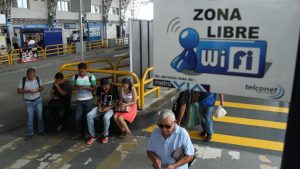 The mayor of Guayaquil Jaime Nebot plans to install 6,000 free and wireless Internet points throughout the city. Today that figure reaches 4,114 points. According to Nebot, Guayaquil was already “a digital city” with 2,500 points. But that “goal reached” can fall apart if the next administrator of the city decides not to renew the wifi contract, whose expiration date is October 2019, five months after Jaime Nebot leaves the “chair of Olmedo.”

The contract, signed in 2014 with Telconet, lasts five years and costs the city 2.5 million dollars a year. It includes, of course, installation costs. But whoever arrives in the Municipality as an administrator could pay a lot less.

Is it necessary to keep the service or not? Urbanism expert Carlos E. Jimenez does not think it is a priority. “There are more important needs to attend,” he says. He believes that the Internet is a service everyone must pay for with their own money.

Xavier Salvador, director of computer science at the City Hall, disagrees: “It is vital to maintaining it. People who do not have resources should have free access to web connectivity.”

Nor would a tourist survive without Wi-Fi, says Holbach Muñetón, director of the Guayaquil Chamber of Tourism. “The first thing anyone who visits us asks is if there is Wi-fi. The world needs connectivity.”

But not everything is perfect, according to downtown residents, the network is often saturated.