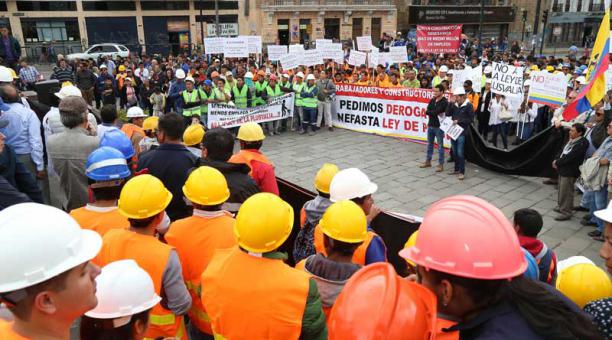 At the end of the government’s deadline to receive the proposals of the referendum, on Tuesday, September 26, 2017, at midnight, the President gave a new clue on the contents that could be included on the ballot.

Lenin Moreno defended the alternation, in his weekly address last night. It is essential, he said, to undertake the formation of new leaders democratically and collectively.

Moreno took advantage to refer to former president Rafael Correa, with whom he maintains a public acid struggle. “It seems strange to me that a former president has stated at some point that the country required alternation (…) and in practice, he has done the opposite.

Meanwhile, proposals continued to reach the Carondelet Palace on Monday. Hundreds of construction workers came to the Plaza Grande in the afternoon, wearing their helmets, to include a question on the repeal of the Capital Gains Law.

The Chamber of Construction Industry announced that this is only the beginning of its mobilization against the regulations. President Moreno himself acknowledged that it had been the hardest-hit economic sector and vital to the country’s economy, so he announced a review. (I)

After vacation,’the gringos’ discovered in Ecuador their favorite place to live