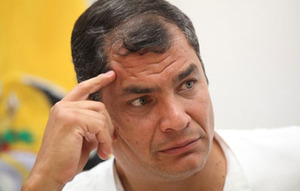 With the argument that after the signing of peace with Peru, the armed forces grew incomprehensibly, now a reduction plan that includes the relocation of other uniformed organizations such as the Customs Surveillance Body, the Transit Commission of Ecuador is prepared, Corps Security Prison and the new National Environmental Guard (current rangers).

A second way to reduce the size of the armed forces is a long term plan that controls admission to the Military Academy.

The project is under discussion in the National Assembly this week and completed the development of the fourth book.

The information was in the weekly report given yesterday by the leader of the regime Rafael Correa, who said that at least 7,910 people would be needed to meet the need in these institutions, and that new staff would demand about $ 148 million in payment of wages.

” It will make a plan of beneficial incentives for those who want to withdraw the Armed Forces For example, in environmental police we have nothing and what we can do is get people very prepared from the armed forces to refer to these bodies. If you have a lieutenant colonel who retires and goes to the Environmental Police, he goes with the salary of its top level without losing their other rights,” he said.

Members of the National Police will undergo evaluation process