The region supports the destabilization thesis

The region in danger. A conclusion that the Government of Ecuador has regarding the acts of violence that have been recorded in the demonstrations presented in several countries. The President of the Republic, Lenín Moreno, and the Minister of Government, María Paula Romo, maintain the criterion that in the protests “armed groups infiltrated” who want to destabilize legally constituted governments. 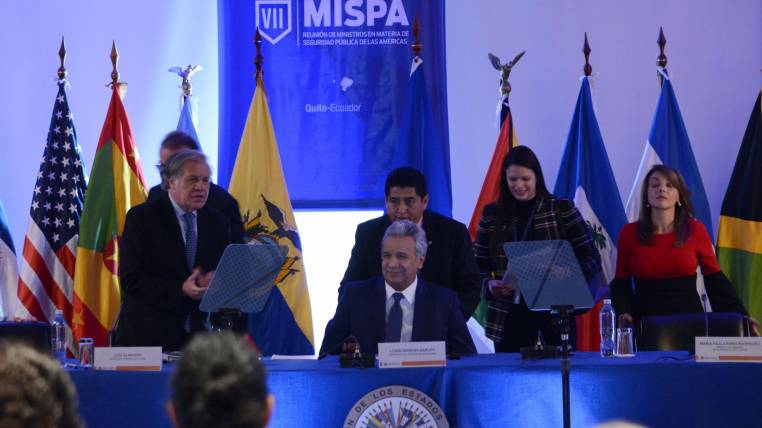 The OAS Secretary, Luis Almagro (left) and President Lenín Moreno at the inauguration of MISPA VII.

Criteria that coincide with the thinking of the secretary of the Organization of American States (OAS), Luis Almagro, who called for defending democracy in the region.

The issue will be analyzed at the Seventh Meeting of Ministers Responsible for Public Security in the Americas (MISPA VII) held in Quito, said Minister Romo, who said that it is the opportunity to evaluate the recent situation of some countries in the region , in which acts of violence were recorded in the context of social protest.

“Without ignoring those protests or demands that are linked to a request regarding the social or economic situation of our countries, it is also true that in our continent organized violence has shown what we do not want to be repeated.”

In addition, the official stressed that it is necessary to have a comprehensive look at the structural origins of the violence and spoke that the public security of the region requires greater operational coordination. “On this occasion the meeting takes place at a very particular and difficult time for the region. Several of our countries face serious destabilizing attempts. It is not the Government, a president, but the rule of law and therefore democracy, ”said the president.

He said that many of the countries have inherited crises of corrupt regimes, which with irresponsible and demagogic policies, have tried to influence the will of the peoples.

Moreno said that Ecuador lost 2.5 billion dollars in the eleven days of paralysis, which represents approximately 3% of gross domestic product (GDP), which means a loss of 210 million dollars a day. He proposed to articulate a hemispheric strategy in the face of these threats.

For his part, the Secretary of the OAS, Luis Almagro, said that social protest is linked to freedom of expression, association and assembly; but that the assault, the burning of public goods -like that of the Comptroller’s building-, looting and vandalism obey and respond to other geopolitical dynamics that needed to be isolated.

The representative of the international organization, Luis Almagro, called for defending democracy and the rule of law, which are the principles that govern the Inter-American System promoted by the OAS.