“The Santay bridge is an obstacle for ships”

For the fourth time the pedestrian bridge that connects Guayaquil with Santay Island was hit by a boat. This time the accident was of the Brazilian Navy Ship, Cisne Branco, which yesterday around 12:30 crashed into the structure. 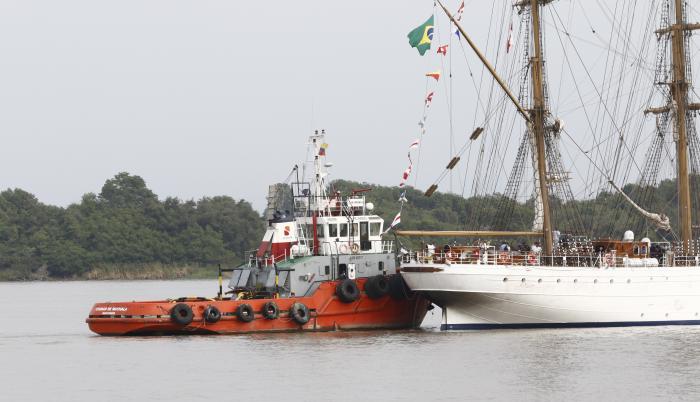 Moment in which the boat was towed for the second time. In the first the trailer turned and the sailboat went against the pedestrian bridge to Santay.

But not only did it happen that the ship hit the bridge, but the trailer that was taking the boat turned over.

Regarding yesterday’s event with the Brazilian ship, it was indicated that there were two errors: “first, the pilot did not take into account the strength of the current ; and two, the trailer was very small compared to the volume of the ship it had to tow and that is why it turned, ”César Viteri, first sergeant of the National Navy, in passive service, explained to EXPRESO.

Viteri added that ships navigate by the force of the wind and that when they enter a port they are under the command of a pilot (who advises the captain of a ship in heavy traffic or narrow channels) who must indicate how to use the machine so that the ship to straighten or to take off from the dock. But, according to preliminary data from the National Directorate of Aquatic Spaces (Dirnea), now the engine has failed.

As reported by the Navy at the end of this edition, the details of the accident would be released last night.

Meanwhile, the captain of the Port of Guayaquil, Danilo Espinoza, stated that the support for the Brazilian ship was coordinated with the appropriate institutions. In addition, it was necessary to organize the action with the divers of the Marine Infantry to refloat the Altar tugboat.

For his part, the head of the Fluvial Division of the Guayaquil Fire Department, Major Jaime Roditti, indicated that there were no injuries or deaths as a result of the accident.

This new accident once again raised the question of the location of the bridge over the Guayas River, which according to practitioners such as José Segovia, is not correctly located. And together with other experts, he has pointed out, in several interviews, that it is an obstacle for ships.

The first time a ship went against the structure was in 2017 and by coincidence it was also in October, that time there was damage to the bridge and people who stayed on the side of the island.

The bridge that is seen as an enemy for navigation, as Segovia has repeatedly said, is 860 meters long, it is located at the height of El Oro and La Ría streets, in the south of the city. It was inaugurated in June 2014. The cost invested in the construction of the bridge was 15,668,625.96 dollars, as indicated by the authorities on that date.

In the other three times, the journalistic reports indicate that the collision was due to the force of the current, although the other times it has been of boats that have been abandoned.

In the pages of this newspaper the questions that have been made to this bridge are also registered. In 2019, the shipyard researcher and president of the Bienvenido Guayaquil Foundation, Fernando Mancero, said that the navigability of the city was closed by that structure.

In fact, it has even been proposed that the bridge be removed from there, but a study is required due to the impact that this would also cause to the inhabitants of Santay Island, who before the COVID-19 pandemic lived off the expense they made the tourists who came to the place. In such a case, the authorities are expected to decide to leave or remove the bridge.