The State will exploit the areas with no private offers 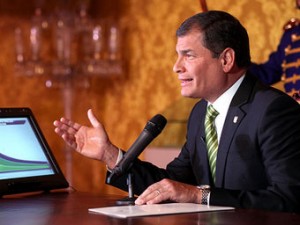 President Rafael Correa said yesterday that the State-owned company Petroamazonas will be responsible for exploiting the oil blocks in the Amazon that do not receive a private offer.

As part of the process that began last year, Ecuador received last week just the proposal from  Spanish company Repsol and Chinese company Andes Petroleum for the exploitation of three blocks of a package of 13 that were offered to private companies.

The President pointed out that the result of the process is that they were “difficult blocks”, so that the State-owned company will take care of them if there are no bidders.

“The policy will be that Petroamazonas explore the blocks that are not interesting to the private oil companies, both national and international (…) because they are far from road infrastructure or pipelines”, said Correa.

To Petroamazonas  three additional blocks  were pre-assigned, in the same area of the ones offered to private companies. To explore one of them the entity partnered with Enap of Chile and Belorusneft from Belarus.

However, if the private sector make a proposal, Petroamazonas could increase their participation in other blocks. The authorities expect to make a new call for proposals next year.

Companies that were awarded with the blocks will be signing a contract for the provision of services under a system of negotiated rate fixing.

The blocks are located near the border with Peru, far from the oil infrastructure and on the edge of the Yasuni Park. It is estimated that the blocks would have a potential of up to some 1.5 billion barrels of crude.