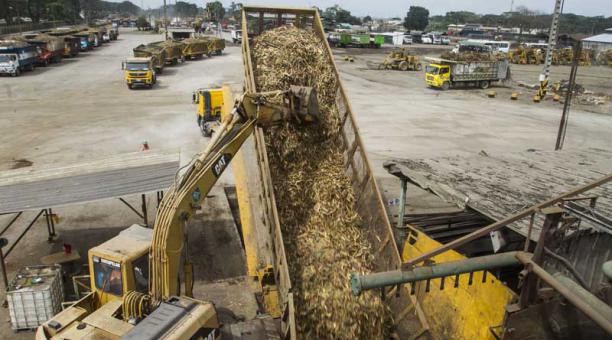 Since mid-June 2018, the harvest started in the coastal region of the country, in a context of low market prices and marketing problems. Despite being one of the crops of permanent cycle that grew the most last year, both in hectares planted and harvested, it still has not reached the 2015 figures.

Production volumes recovered last year, not sales. According to representatives of the sector, there are two main factors that explain this problem. The first is related to high production costs, which affect items such as wages and agrochemicals used in planting. This makes the local product less competitive than sugar from Colombia.

The mills claim that they cannot compete with those prices. According to the Ministry of Agriculture and Livestock (MAG), the minimum support price of the metric ton of sugarcane is USD 32.20. While the Colombian product sells between USD 24 and USD 26. The sack of processed sugar can be found at USD 35 while that of Colombia, at USD 25.

The income from the northern border of about 80 000 tons of sucrose, registered last year, worried the sugarcane growers and sugar mills. To protect the industry, last October the Government asked the Andean Community (CAN) to implement a tariff measure to tax with 15% the import of sugar exceeding 30,000 tons, from the countries of this block. The request was rejected.

In Ecuador there are 74,000 hectares of sugarcane. Of this, 50% belongs to the mills and the other 50% is distributed among the 3,000 small and medium producers. The cane fields of Guayas, a province that concentrates 82.95% of the country’s total production, are ready for harvest.

In the canton Marcelino Maridueña, located an hour and a half from Guayaquil, is the San Carlos sugar mill. There, its inhabitants and workers began the season with a mass in the chapel. The workers start their journey at 06:00. Everyone knows their place of work, because many have about 2 decades in the trade.

There are cane cutters for the factory and those who cut the seed for new crops. Each one has its utensils: glasses, gloves, metallic leggings for the legs and the machete. Carlos Mayorga, deputy administrative manager of Ingenio San Carlos, says that for this time it is necessary to hire many people.

We work with at least 3 200 people. The mill has an influence on 28,000 hectares, between the areas of own planting and of private sugarcane growers, to whom they buy the production. Mayorga says that 70% of its production sells it in the local market and the majority goes to the industrial area. But before the problem of commercialization, sales to this sector have fallen.

Miguel Pérez, president of the National Sugar Federation (Fenazucar), affirms that the average price of the bag of sugar in the local market was “depressed” in 2017. He assures that the profitability of the industry decreased 56% with respect to the previous year. The second factor that affects the low commercialization is the “negative image” of sugar for health.

In 2014, the food traffic light was introduced into the market, which influenced companies to reformulate their products. According to the World Health Organization (WHO), the intake of free sugars, including sugary drinks, is one of the main factors of obesity and diabetes.

Ernesto Gómez, administrative manager of the Agroindustrial Business Unit of Valdez, assures that they chose to diversify the portfolio. Incorporated since last year the Steviapanela, product that has two presentations: in a case of 500 grams and in ‘stik pack’.

In addition, they launched organic Valdez coconut sugar. In spite of the panorama, the mill has projected for this harvest to process 1.97 million tons of cane, both its own and that of sugarcane growers. Of this production, it estimates that it will produce 3.3 million bags for the local market. The export quota to the USA It is 12 400 tons. (I)