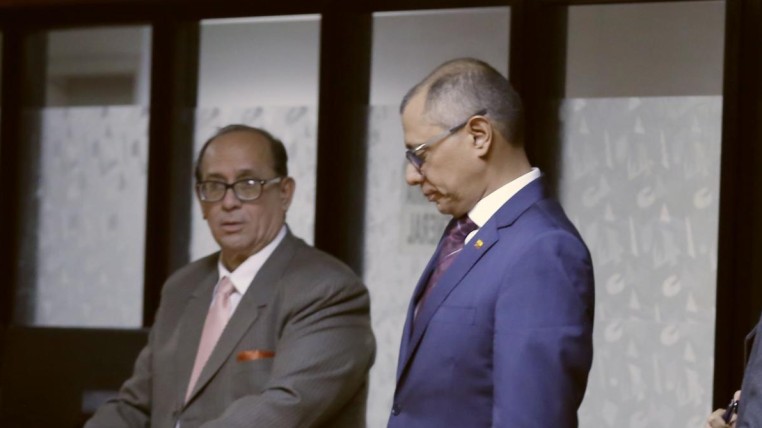 More than four hours had the vice president without functions Jorge Glas to convince of his innocence to the court that judged him for illicit association in the Odebrecht case.

The judges listened attentively and followed his script written in 113 pages on December 4, on day 10 of the trial against him and eight others. But more judges weighed the evidence, testimonies, criminal assistance and expert reports presented by the prosecutor Carlos Baca Mancheno to demonstrate that Glas received bribes through his uncle Ricardo Rivera, also convicted. Judges Edgar Flores, Sylvia Sanchez and Richard Villagómez, the parties and the audience

present on the eighth floor of the National Court, heard their own testimony.

They also followed his exposition in a document. The vice president developed his ideas with the help of a projector and Power Point slides. His presentation had an order and content defined on the third page. Before a biblical quote from Romans 1.18: “The wrath of God is revealed from heaven against all ungodliness and injustice of men who stop the truth with injustice.”

Then he broke down every point of his defense. It started with an initial statement that did not differ much from the position held during the months of the investigations into the corruption plot. He said that he has fought corruption throughout his life, has always collaborated with justice and vindicates the serious work of state institutions. He asked the justice to fulfill his responsibility in freedom and independence, observing due process, superimposing the rule of law and not the opinion. He reminded the judges that they must resolve the case based on the elements provided by the parties. He then enumerated the public positions he held since the beginning of the Government of former President Rafael Correa: Chairman of the Board of the Solidarity Fund, Minister of Telecommunications, Strategic Sectors and Vice President from 2013 to the present.

He assured that the charges were complied with in accordance with the legal system and the rules set forth. He noted that it has been investigated and audited to the full by the Comptroller’s Office (during the administration of former Comptroller Carlos Pólit accused of concussion for receiving bribes from Odebrecht).

He showed results of those audits, the exculpations, reports that do not report more news than his income as a server. Odebrecht reiterated that it is proven that gave and received bribes, their credibility is in doubt and want to be saved by sinking anyone in any way and without evidence.

He denied having asked for or received money, or authorized anyone to speak on his behalf and if someone did, he must respond to justice. He said there was no negotiation for the return of Odebrecht. That, in spite of the fact that the former Legal Secretary of the Presidency, Alexis Mera, confirmed that Glas carried out the political negotiations of the contracts when he was minister and vice president. Mera made another revelation: “We (Mera and Correa) relied on what Jorge Glas said”. Before the judges the vice president only accepted that he demanded the fulfillment of the contract to deliver repaired and commissioned San Francisco. In addition to the requirement of 20 million dollars in compensation.

He said that as a minister he directed the supervision of compliance with the transactional act authorized by the attorney Diego García. The following 12 points were to talk about the Brazilian credit for Manduriacu and Daule Vinces and the demands, the mentions of their name in recordings and chats, exchanged emails

For the accuser César Montúfar, the testimony of Glas made it clear that former President Correa was aware of everything. “In the interrogation that we did, we asked him if he informed the president about what was happening in the Strategic Sectors and he responded that he informed him seven days a week, 24 hours a day,” Montúfar recalled.

That is why he considers that Correa should be linked to the investigations. Glas was linked to the case last August. His prison was issued on October 2. If he is not released from jail until January 2, he will cease to be the second president when the abandonment of his position is declared. The vice president insisted on the last hearing in which he was denied the conditional suspension of the sentence that the objective of everything is to ‘seize the charge’.

With this scenario, his eyes are still on international bodies such as the Inter-American Court of Human Rights, to which he has already requested precautionary measures. Revelations Bribes In December 2016 the US Department of Justice UU it revealed that Odebrecht gave bribes in 12 countries. In Ecuador, 33.5 million dollars. There were 18 investigated. Five did not receive an accusation and 13 were called to trial.

The informer José Conceição Santos, former director of Odebrecht in Ecuador, became a key player in the investigation of the case. In his testimonies and files delivered detailed the names of the officials and the amounts they received. Other Crimes In the judgment, the court of the Court ordered the Prosecutor’s Office to investigate eight offenses derived from the unlawful association: concussion, bribery, illicit enrichment, embezzlement, influence peddling, money laundering, organized crime and front-row. (I)

The bonus increase seeks the reduction of extreme poverty