There are conflicting versions by the removal of 129 safeguards 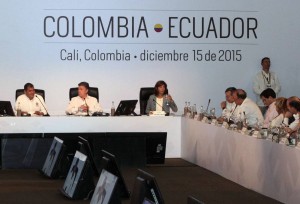 The Ministry of Trade of Colombia and the Ministry of Foreign Trade of Ecuador have different versions about the reasons for the removal of the safeguards of 129 subheadings.

According to a publication on the website of the Colombian Ministry, “in the framework of the IV Colombia-Ecuador Binational Cabinet, after the Minister of Trade, Industry and Tourism, Cecilia Alvarez-Correa, asked the government of the neighboring country (Ecuador) to exclude the 45% tariff to a group of Colombian goods, that country (Ecuador) decided to make a commitment.”

This publication dates back from December 28 and clarifies that the elimination of surcharges on 129 subheadings “represents a relief of $ 73 million in Colombian exports (based on 2014), especially for the following sectors: appliances, chemical industry, metallurgy, food.”

On the website of the Ministry of Foreign Trade of Ecuador is explained that on December 11 the Resolution 046-2015 was adopted, which made more flexible the surcharge for 129 items.