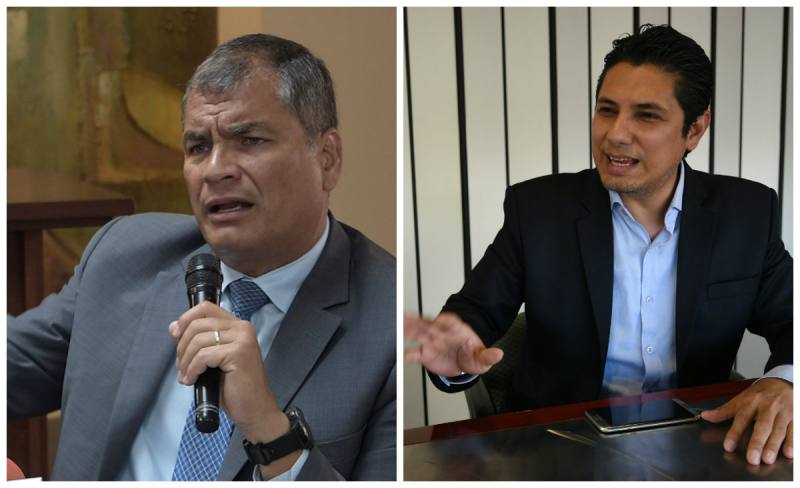 A series of tweets by Fernando Balda against the regime of Rafael Correa made him an adversary of the then president, according to the activist who says he later suffered a kidnapping in Colombia orchestrated by the president himself and that the Ecuadorian justice did not investigate in 2012.

How did Fernando Balda become, of sympathizer of the then president Rafael Correa in his accuser? Correa assures that it is a political persecution since it seeks to humiliate him internationally after the red diffusion that will be made to Interpol to detain him in Belgium, extradite him and bring him to prison for refusing to appear before the National Court in Quito that was the precautionary measure of the judge.

The following is a chronology of the Balda Case, which includes the statements of one of those accused of kidnapping, Raúl Chicaiza, who accepted the effective cooperation judicial procedure.

April 26, 2006: Fernando Balda was part of Alianza PAIS. After disagreements he went to Patriotic Society and then made his way in the most radical opposition. That earned him a trial for insults and he fled to Colombia.

7 September 2009: Fernando Balda takes refuge for the first time in Colombia and then returns in mid  2010.

May 3, 2012: Raúl Chicaiza receives orders to travel to Colombia to infiltrate a meeting of former President Álvaro Uribe and Ecuadorian opponents.

May 8, 2012: Raúl Chicaiza appears before Fernando Balda as part of an NGO and electronic security entrepreneur in Medellín.

June 6, 2012: Contra Balda is given an operation to stop him in Bogotá. They leave him free because he made “high level” calls.

July 6, 2012: The mission changes to locate and know the movements of Balda to bring the activist to Ecuador.

13 July 2012: The kidnapping of Balda takes place in Bogotá. Five people intervene in the crime. They let him free almost immediately because they were persecuted.

July 14, 2012: Raúl Chicaiza returns to Quito and they call him Pablo Romero and ‘Carlitos’, pseudonym of then-President Rafael Correa, to find out what happened in the operation in Colombia.

October 10, 2012: Fernando Balda is deported from Colombia to Ecuador to serve a sentence for slander. Arrives in Guayaquil.

4 April 2013: Balda presents the complaint in the Office of the Prosecutor for the kidnapping that he lived in Colombia and in which he says Rafael Correa and other officials would be involved.

May 15, 2015: Four Colombians are sentenced to 60 months in prison in their country for the crime of simple kidnapping committed against Fernando Balda.

January 18, 2018: Balda is called to the Prosecutor’s Office to acknowledge his signature for the kidnapping complaint filed in Ecuador.

March 18, 2018: Intelligence agents Raúl Chicaiza, Jessica Falcón and Jorge Espinoza are detained. They are accused of having participated in the kidnapping process of Balda.

May 31, 2018. The case is linked to former intelligence director of the General Police Fausto Tamayo and Pablo Romero, former national secretary of intelligence (Senain).

June 17, 2018: Former intelligence secretary Pablo Romero Quezada is arrested in Spain after being linked by the alleged kidnapping of Fernando Balda, in 2012.

June 18, 2018: Former President Rafael Correa is linked to the case that investigates the kidnapping of Fernando Balda in Ecuador.

June 19, 2018: The judge of the National Court of Justice, Daniella Camacho, issued a prohibition for the former president to physically approach the ex-legislator. Correa must also appear periodically before the Ecuadorian Justice. He denied the request of the Office of the Prosecutor to order Correa to use the electronic shackle.

June 21, 2018: “When Rafael Correa was president of the Republic if we did not obey, we had a secure problem.” With that phrase began the almost five hours of anticipated testimony given by Raúl Ch., Agent of the National Secretariat of Intelligence (Senain) since 2010.

June 27, 2018: A Court of the National Court declared the appeal appeal inadmissible and confirmed the preventive detention for Pablo Romero in the case of alleged illicit association and kidnapping of Fernando Balda, the Prosecutor’s Office informed.

June 28, 2018: Given insinuations made via Twitter by former President Rafael Correa that Raúl Chicaiza would not have evidence to involve him with the kidnapping of politician Fernando Balda and that everything would be a “montage,” Diego Chimbo, the exagente’s lawyer, assures that not only there would be telephone calls, but many other ‘indicatives’ that support their connection to the process.

June 29, 2018: Balda presented a letter in which he asked to be accepted as private accuser of Correa. He is accuser of the agents also prosecuted Raúl Chicaiza, Jéssica Falcón and Jorge Espinoza, former Director of Intelligence of the General Police Fausto Tamayo and Pablo Romero, former Secretary of Intelligence.

July 2, 2018: Former President Rafael Correa decided to go to the Consulate of Ecuador in Brussels, and in a letter he requested that his diplomatic mission certify his presentation.

July 3, 2018: Judge Daniella Camacho accepted the fiscal petition and changed for Rafael Correa the precautionary measure to appear before the Court, by preventive detention.

In addition, a red broadcast was issued for Interpol to detain him with extradition. If he is arrested, he must come to Jail 4 in Quito, where his former vice-president Jorge Glas is imprisoned. (I)