This week expires the deadline for Fundamedios 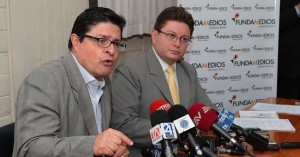 Until Thursday, the Fundamedios NGO has to submit exculpatory evidence in the dissolution process initiated against it by the Ministry of Communication (SECOM).

Fundamedios director César Ricaurte, said they will comply with the ‘formality’ even before the deadline.

“We will do it under protest or some similar figure. They give us will this time to wash their hands and say there is a due process, but in reality the decision has been already taken,” he said.

He commented that in the exculpatory evidence they will ‘prove’ that Fundamedios has not exercised “partisan politics,” which is one of the causes for dissolution Decree 16 establishes.