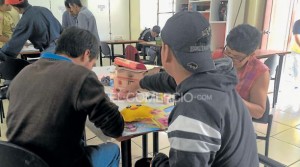 Cases like Eduardo’s mother, who had to resort to a lender who gave her a loan of $ 5,000 to fund the treatment of her son because her salary as a maid ($ 400) was not enough to afford the $ 800 fee at a clinic in Riobamba, which was the cheapest she could find.

The same happened to Graciela and Mario, who had to pay USD 6000 for the treatment of their daughter Lesly. According to the young woman, in the rehabilitation center she was attended by a psychologist, a doctor and a spiritual guide.

In fact, the team of professionals working in these centers is one of the factors so that the costs are high. This was assured by three directors of rehabilitation centers who were consulted by this newspaper. The supply of drugs is also another reason for the high prices.

In the Specialized Drug Treatment Center (CETAD) of the Ministry of Health, in Quito, the 32 interns are treated under psychological, family, occupational and recreative therapies.

The Cetad service is free. But in the country there are only two of these state centers in Quito and Guayaquil. However, the authorities note that there exists a plan to create more.