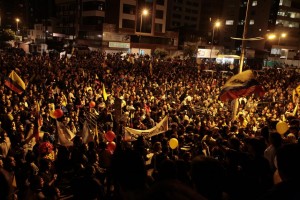 Thousands of citizens participated Thursday in protest demonstrations against the government in major cities across the country to reject a bill that creates new taxes, while government supporters congregated in support of President Rafael Correa.

With a massive turnout, opponents gathered in the north of the capital and unfurled a giant national flag in front of the headquarters of the government party Alianza PAIS. They were also in the center of Guayaquil and Cuenca, with signs that rejected the government’s economic policy and reiterated this with shouts: “out Correa out” and “no more taxes.”

Clashes between the police and protesters took place in Guayaquil and Cuenca, in which initially no one was injured.

In Guayaquil opposition groups concentrated, as usual, in the Centenario Park and from there, after 17:00, they march through the Nueve de Octubre Avenue to the pier.

A life-size cardboard puppet representing Rafael Correa, overflowing dollars, stood out in the concentration, which kept on adding followers during its advance, including the Pro Futuro group, which displayed a large cloth banner with the phrase “No more taxes.”

In the southern sidewalk of the 9 de Octubre avenue, from the Pedro Carbo street to the pier, a barrier of police agents closed the passage of walkers to the south, towards the Ministry of Government. There, along two blocks, there were struggles, blows, a wounded and two people were arrested.