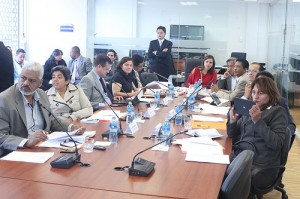 The Committee on the Rights of Workers and Social Security defined yesterday who will appear before the Assembly to prepare reports for the Reformatory draft to the Telecommunications act. These will be: Jaime Guerrero, Minister of Telecommunications; Pedro Merizalde, Minister of Non-Renewable Resources; Carlos Marx Carrasco, Minister for Industrial Relations; Ximena Amoroso, Director of the Internal Revenue Service (SRI for its Spanish acronym).

They will be joined by the representatives of workers of Claro and Movistar, the managers of those companies and Fabián Jaramillo, Superintendent of Telecommunications.

The assemblymen of this committee sessioned yesterday in Ibarra (Imbabura).

According to Article 56 of the Organic Law on Legislative Function, after the specialized commission receives the project, it has 45 days to issue reports for the final debate.