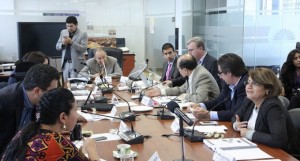 A report of the General Attorney of the State would lead to the incentive for tax stability in investments contracts of over $ 100 million, both for the case of large-scale mining and basic industries, said the Commission on Economic Regime that made the report of the Production Incentives and Tax Fraud Prevention bill, of which the first debate will be held today at 10:30.

“The commitments acquired and that are contract enabling shall not affect or conflict with the Ecuadorian legal system,” the commission said in its report.

This legislative body was in favor of the proposal of a specific increase of $ 0.09 to $ 0.13 to cigarettes.

That government proposal raised questions in the business sector. The Chamber of Industries and Production indicated they consider that the Increase for Special Consumption of tobacco would generate more smuggling and would not decrease the consumption.

The report also determined that promoting employment for seniors, will let companies make deductions from their income tax.

The Government anticipates it is expected to raise around $ 200 million with the new measures that would avoid tax evasion.