Tomatoes are ready to travel to the United States; avocados wait 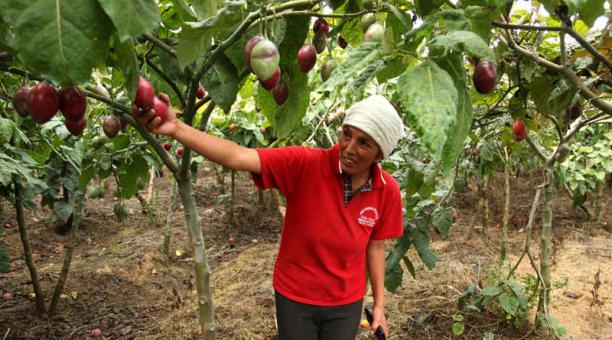 The United States will open its borders on Wednesday, July 4, 2018, to receive the tree tomato, as fresh fruit, from Ecuador. The announcement generates expectation in the producers of Tungurahua, the province with the largest amount of this crop.

Until Monday, the US Animal and Plant Health Inspection Service. (Aphis) had not received any notification of Ecuadorian exports. However, farmers are still in the process of preparing to comply with the phytosanitary, packaging and logistics requirements to enter that market, after the approval of Aphis, a month ago.

“If exporting means having better prices in the sale, combating pests and technifying the crop, we are ready,” says farmer Piedad Ganag. The 43-year-old producer says that her 7,500 m² of plantations are monitored by Agrocalidad technicians, the simile of Aphis.

His crops are in an area declared free of a plague (a butterfly), which must be controlled if you want to export. She and the other farmers in the sector of Benítez, in Pelileo, locate traps with the purpose of monitoring the presence of this insect. Other controlled areas are García Moreno, Chiquicha, La Matriz, Huambaló and El Rosario; also, Píllaro, Ambato, Quero, Mocha and Tisaleo.

The crops are inspected by Aphis and Agrocalidad. “It is one of the requirements of the Aphis technicians who have already visited these areas. The producers must meet other phytosanitary requirements so that our product can be admitted in the United States, “says Javier Rodríguez, district director of Agrocalidad.

After Tungurahua, other producers are Imbabura, Cotopaxi, Chimborazo, Pichincha, Azuay and Bolívar. For now, Pelileo’s production is sold in the markets of Cuenca and Azogues.

Edith Freire and 50 producers in the Chiquicha Valley, in northwestern Pelileo, learned to grow without chemicals, in order to export. They are trained by the Prefecture, Agrocalidad and the MAG.

Vinicio Morales, of the Association, indicates that “the export of tomato would help the sector, due to low prices”. Esteban Espinosa, Aphis technician, says that Ecuador has a lot of potential to export, due to the presence of a strong Ecuadorian and Latin population in the US, which consumes tree tomatoes.

The avocado is on the list Aphis began the process to allow the entry of the avocado, of the hass variety, to its market. This moment, the entity receives the comments of producers and exporters on their proposal of phytosanitary requirements and other parameters for access.

Suggestions will be received until August 14. Then will come the analysis stage, to approve the final requirements for income. There is no defined deadline to know when it can be exported. In Imbabura, producers believe they have opportunities.

According to Corpoaguacate, which promotes cultivation in the country, Ecuador has planted 680 hectares of hass, which guarantees 400 tons per year. Jorge Altuna, president of Corpoaguacate, indicates that the thick and rough husk of the hass allows a better handling and extends the useful life of the fruit, which borders the 30 days, without altering its consistency, flavor or color.

Corpoaguacate works on the massification of the hass variety. The organization is made up of 25 members, who cultivate 350 hectares in Pichincha, Imbabura, Carchi and Santa Elena. In the first quarter they exported 98,000 kilos from the Sierra and 160,000 from the coast to Spain, Holland and China.

It also ensures that there are orders of two and three containers per week, which Corpoaguacate has not been able to attend. That’s why they are looking for partners in the country, to increase the offer, says Marcelo Reinoso, producer of hass. Altuna believes that entering the US It is a magnificent opportunity. But for this they must increase the sowings. (I)