Which present will you give to your children this Christmas? The range of possibilities is large for current tastes of children.
In local trade and distribution of Guayaquil are offered from a set of chrome soldiers, The Avengers superheroes or the new Barbie dolls to the latest generation of video games, the electric scooter or a tablet.

Every year the preference changes. Gone are the plastic balls, rag dolls or cars and wooden boats that the past generations waited anxiously to receive on 24 midnight.
Remember what you received for Christmas when you were a child? What was the fashion toy when your parents or grandparents were anxiously waiting to open Christmas Eve?

Through the publicized notices published in El Universo, the newspaper want to show the toys promoted on those times.

1920 and 1930
There were few shops that sold domestic and imported products. The Exchange houses Casa Hugo Behr and Luis A. Noboa (October 9 111) advertised toys, mostly made in Germany, as soldiers, cars, dolls. 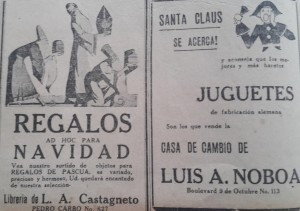 In a advertizing published in December 1935 , the warehouse J. Guillen (Luque 119) offered “artistic dolls from 1.50 sucres”; while china and canvas dolls were offered on Cucalón Cia., which was located in Ycaza P. 401-403 and Cordoba.

With the arrival of the films of Walt Disney, advertisers promoted those dolls to attract the younger at the time.

At the end of the 1970 the films Superman, Star Wars and Star Trek have Brought to Ecuador characters made of plastic, without joints, which were the novel for children.

They came to the country children’s series as Masters of the Universe, The Smurfs, GI Joe, Transformers, My Litle Ponny, ET, Pacman, Ghostbusters, Muppets Baby, Speed, Barbie, the Cabbage, Among Others, and a variety of toys that wowed a entire generation.

In the halls of the Remembered Fimco (Victor Manuel Rendon first and Boyaca and then a Escobedo and October 9), Anton Brothers (October 9 and Escobedo) Dardapo (Cdla. Kennedy), Hilda Guillen (Francisco Bologna and Av. Kennedy) The Importer El Rosado, Pycca and Casa Tosi, on their toys section, offered these animated characters.

From 2000 Until Now, Salon del Juguete and Mi Jugueteria have the market of the foreign children’s toys series.

In the distributors located in downtown of Guayaquil the traditional toys are kept, most made in China.

Dismissals of psychologists in states schools