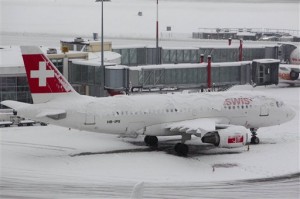 Christmas week has arrived and Europe is still without transportation. The two airports from Paris have canceled a third part of its flights and there are no busses for the heavy snow that have fallen this morning. Also the trains are delayed.

In almost all European airports there are delays, in Germany, Frankfurt -the airport with the biggest traffic at continental Europe -still with some closed tracks. But Fraport, the management firm, says that international flights will take off today but delayed.

Belgium joined this morning to the European air chaos announcing the closure of Brussels airport until Wednesday for lack of liquid for the deicing of airplanes.
In England airports are operating partially, there are large losses. It is estimated that only British Airways lost 12 million Euros a day. Weather forecasts are not promising for England is expected frosts and snows for future days.

Eurocontrol, the organization that is responsible for ensuring European flights, estimated that 22.500 flights would be canceled or delayed today.
Eurostar trains which links Paris to London has a lot of people in their stations making long lines to get a train; the situation is so critical that the agency has asked people to cancel their trip unless it is urgent.