During the afternoon of this Wednesday , February 12 , the president of Ecuador, Lenín Moreno , held a meeting with his US couple, Donald Trump , during an agenda of activities of the Ecuadorian president in Washington . 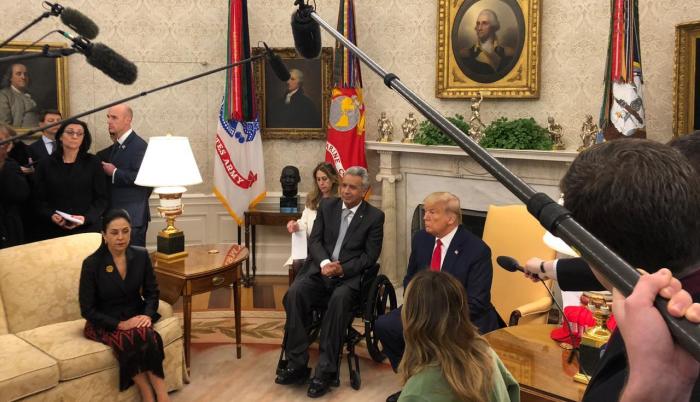 The visit seems to be productive. Ecuadorian President Lenin Moreno and his US couple, Donald Trump, focused their attention on the signing of a trade agreement. Trump even gave guidelines on how that agreement would be.

For him, the newly signed document between the United States , Mexico and Canada would be an ideal model for Ecuadorian products to enter the northern country with benefits and without tariffs.

Trump admitted that the goods that Ecuador exports are highly required in the US market. That is why, he said, an agreement will be central to the conversation held by the leaders in the White House.

Security is also important. Donald Trump, in statements with Moreno, said that Ecuador faces threats from armed drug trafficking groups. Seeking military alternatives is one of the proposals of the American president.

Moreno’s agenda, whose visit concludes on February 15, also includes a meeting with the Secretary General of the Organization of American States (OAS), Luis Almagro , and with the president of the World Bank , David Malpass .

After 2:30 p.m., when Moreno arrived at the White House with his wife, Rocío González , Trump and the Ecuadorian president, they pointed out that the political and social situation in Venezuela alerts both countries. They did not anticipate what actions they will take in this regard.

Trump broke the protocol stipulated because no statements were contemplated. The two presidents, however, spoke with the media in the oval room.

Fruit of the meeting, agreements signed in several areas between the two nations emerged. In education , for example, around 9,000 Ecuadorian teachers will be trained in English by 200 American teachers who will visit Ecuador soon.

On employment issues, Ecuador will officially enter ‘ America Grows ‘, the American investment program. Likewise, a team of US specialists will visit Ecuador to discuss issues about the trade agreement or at least release of tariffs for various products.

Finally, in the fight against corruption , a special unit will be created in Ecuador to combat cybercrime and improve Ecuadorian skills in this area with the exchange of information.

This is the first result of an agenda of meetings in which President Moreno meets with some personalities of American politics. Tomorrow, Thursday , February 12 , he will meet with US Senate authorities.