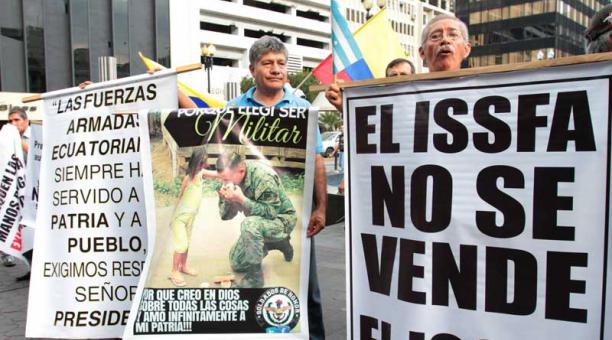 The Government and the Armed Forces move their chips. On one side, the Assembly, tha has the government´s majority, accelerates the debate reforms to military insurance (ISSFA) and police (ISSPOL) and already defined the time for that discussion: September 1st, at 09:30.

On the other side are the active uniformed, trying to block the session. To achieve this, on August 30, the captain of the Navy, Jorge Zambrano, and Army Major Jose Intriago, resorted to regular justice and each one presented protection actions. The documents arrived shortly before noon to the office of Judge Henry Jaya, from the Criminal Unit Guayaquil.

The officers´ demand is against Defense Minister, Ricardo Patiño; President of the Assembly, Gabriela Rivadeneira, and the 11 legislators who make up the Worker Rights Commission, where reforms are analyzed. The military believe that their constitutional rights were violated and ask to be heard in the legislative table and thus expose their “technical arguments” against the changes posed by officialdom.