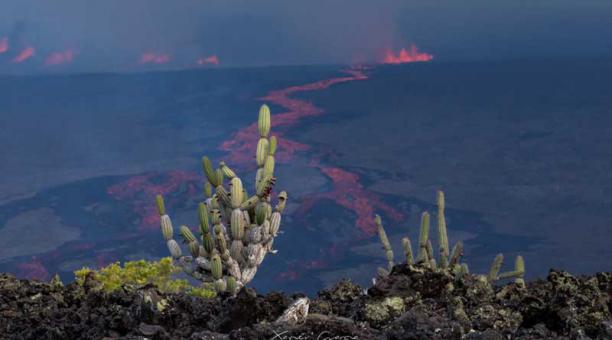 The eruptive activity of the volcanoes La Cumbre, on Fernandina Island, and the Sierra Negra on Isabela Island, instead of alienating tourists, rather draws their attention.

This is confirmed by authorities, operators and hoteliers who indicate that travelers continue to make reservations and reach the archipelago. Lorena Tapia, president of the Government Council of Galapagos, says that although these natural events are an attraction, they work together with several organizations so that the tourism activity can be carried out responsibly.

Tapia affirms that there are no reports of canceled tours or affected travelers. The records of the Galapagos National Park detail that 241 800 tourists entered the islands in 2017. Of this amount, 69% is foreign, compared to 31% of domestic travelers.

Rodrigo Jácome, president of the Galápagos Chamber of Tourism, indicates that in the case of the volcano La Cumbre (Fernandina) it is not in a populated area and therefore does not affect visitors, because it is far from the most frequented places. Something similar, he adds, happens with Sierra Negra.

“It became a show that everyone wants to reach.” The earthquakes from this volcano increased on June 26 when a new eruptive process began and the orange alert was declared. Reports from the Geophysical Institute indicated this week that the behavior is less intense.

Therefore, the Ministry of Tourism declared on Monday, July 2, 2018, the opening of areas that were restricted to access by tourists. For example, there is Mirador 2 and the site called Fumarolic Field or Mines of Sulfur.

However, due to yesterday’s earthquakes (the highest reached 5.4), the closure of both sites was recommended again, for safety reasons. “It has helped us position the Galápagos more and put Ecuador in the eyes of the world. There are no cancellations and there is more interest in knowing what is happening, “says Richard Dávila, president of the Association of Receptive Tourism Operators.

This leader remembers that most of the tickets and tours to the islands are bought up to six months in advance. In fact, many of the trips are reserved for this time (July), considered as the peak season of visitors.

Without specifying data, Dávila affirms that the reservations in these days are the usual ones at the beginning of the season. According to information from the Government Council, there are 150 tourist sites throughout the archipelago.

Of that amount, only two have restrictions for Sierra Negra. Last year, 91,000 people came to the attractions of Isabela Island, and precisely the site that recorded the most arrivals was the Sierra Negra volcano with more than 35,000 visitors. Of that amount, 93% was foreign.

Other destinations more frequented on the island are the Arnaldo Tupiza Center and the Wall of Tears. Isabela has 51 accommodations, among hotels and hostels. Each room costs USD 45 to 700 per night. The price varies depending on the services offered, types of tours, restaurants, among others.

Fernando Proaño, manager of the hotel The Wooden House Lodge (Isabela), reiterates that visits to the island arrive throughout the year. Ensures that lava flows or ash have reached the area of the hotels.

Among the options offered are trips to Las Tintoreras, Concha de Perla and Laguna Los Flamingos. “Reservations have been better. We warn our clients before making a reservation that everything is fine, “says Carlos Rodríguez of the Abermale hotel. This establishment offers tours to the tunnels, the Wall of Tears and the Pearl Shell. Ximena Mera, guide of the operator Rosedelco, mentions that many passengers “were anxious to travel and know a little bit about the volcano”.

Since the restrictions were lifted, they have already made four tours with groups of 16 people. “In the sector of the volcano you can take walks, walk near the crater and go to the viewpoints.” Pedro Naranjo, from the agency Iguana Crossing, offers lodging and tours throughout Isabela.

Before the reactivation of the volcano, the routes included walks along the edge of the crater. “If the travelers had energy, they walked to Volcán Chico. There they observed fumaroles and spectacular lava formations. ” Although the eruption prevents these walks, operators and travel agents offer other activities.

Since August, new requirements for the entry of tourists to Galapagos will be applied. You must present a round-trip air ticket, a hotel reservation or invitation from a resident of the islands and have medical insurance (for foreigners). (I)