UK: We hope Ecuador helps solveing the situation of Assange 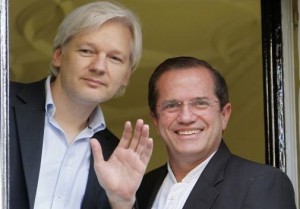 The UK has sought the cooperation of Ecuador in order to find “an end” to the “difficult and expensive” situation of the WikiLeaks founder Julian Assange, exiled for two years in the Ecuadorian embassy in London.

In a joint press conference between the Ecuadorian Foreign Minister Ricardo Patiño and Assange in the Ecuadorian embassy in London, a spokesman of the British Ministry of Foreign Affairs told EFE: “we continue as committed as ever to reach a diplomatic solution to the situation” .

“As always, we hope that Ecuador  will help bring to an end this situation difficult and expensive,” said the official from the UK.

For his part, the representative of the Foreign Office added that the government of London is “clear” in stating that British law “must be respected” and that “Assange should be extradited to Sweden.”

He added that this country claims Assange to question him on several sex crimes which he has always denied.

Ceasefire between Israel and Palestine is extended another 24 hours